Home League of Legends Blog Why Do LoL Superteams Perform so Poorly In Tournaments? 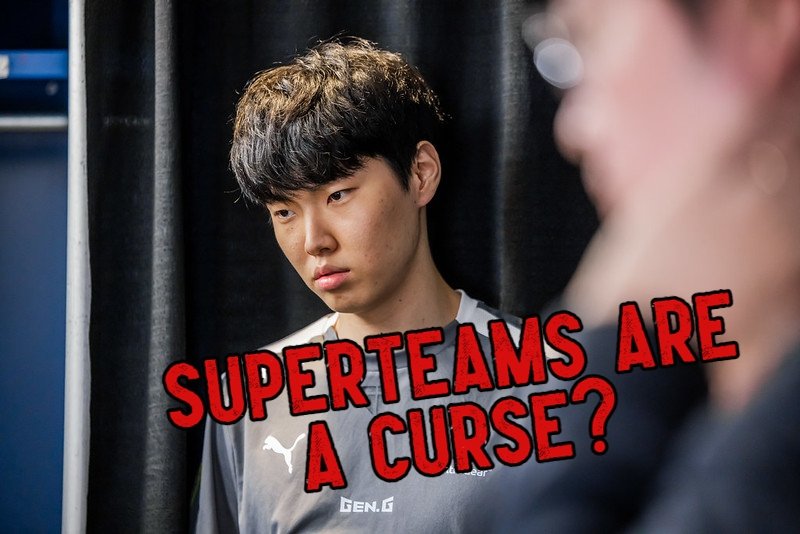 League of Legends esports is growing every year and many people are starting to join viewing parties during the World Championships. While not many people know about esports teams, there are a lot of people who follow roster changes during the preseason. One of the biggest enigmas of esports is that LoL superteams almost always ends up failing, especially in teams that you expect would take it all the way to the finals but end up bombing out early.

What are LoL Superteams?

LoL superteams refer to teams that contain four or more superstar players. These individuals are considered to be a top 3 or top 5 player in their respective roles before the season even begins because they’ve already established themselves from previous performances. It’s extremely unusual to see a superteam because it would take a lot of budget to assemble all of the best players in a region in one organization.

Since a superteam contains superstar players, they are expected to have an exceptional performance during the regular season. They are always ranked at the top 3 of the region before the season begins, after the organization has officially announced their final rosters. This creates hype around that team and draws a lot of people to support them. During playoffs and international tournaments, they are almost always seen as favorites to win.

The Bad Streak of LoL Superteams

Superteams have become more of a curse than a blessing for most regions in recent years due to most of them bombing out early or falling short when it matter. Recent examples in 2022 include the LEC’s Team Vitality and the LCS’ Team Liquid, which both failed to make it to Worlds, while superteams like LCK’s Gen.G and LPL’s TOP Esports didn’t perform up to standard despite being favorites at the World Championships.

The most successful superteams in recent years include the 2019 G2 Esports, which won MSI and placed 2nd at Worlds, as well as the 2021 Damwon Kia roster that reached finals in both MSI and Worlds. While two examples might clear the name of superteams around the world, there are too many teams out there that have failed miserably and have permanently lost the fans’ belief in any superteam ever winning the World Championships.

The Main Reasons that Superteams Fail

In traditional sports, superteams also tend to fail but not as bad as the examples we have in esports. However, the reason why traditional sports and esports superteams both fail are the similar in nature. Let’s take a look at some reasons why League of Legends have a lot of extremely hyped rosters that end up failing really hard whenever they need to succeed.

The best player on the team is most often the leader and more often than not, the best player themselves know that as well. The best players in the team know how they want to play the game and expect the team to set them up for success. However, everything crumbles apart if you have more than three players that share the same mentality in the game. A superstar might end up holding back to give their fellow superstars a chance to shine or their ideals about the game might conflict with other superstars creating an anti-synergy within the structure.

This is why a lot of teams only pick up two or less veterans on the team and add some middle-of-the-pack or rookie players to the roster. This creates consistency and stability within the structure with no more than two veterans discussing how to play the game while the others are only expected to follow. This has proven to be a successful formula in past tournaments since it’s easier to coordinate a team that knows who to listen to.

Many superstars have attained “superstar” status simply by being veterans in the game. We’re not saying that they weren’t good before, but it’s a common occurrence that a player a player is no longer at the same level as their peak. While they have average performances, they are often outshined by upcoming talent and consistent superstars that manage to keep their performance at a consistent level.

Teams can’t be blamed for not ending up champions if they have washed-up players on the team. However, it is the expectation from fans that ultimately end up as deal-breakers, even though the organization probably ended up recruiting these superstars purely to boost their popularity (and sale) among the people. A good example is TSM‘s 2020 roster that included Doublelift, Bjergsen, Biofrost, Spica, and BrokenBlade who ended up 0-6 in the World Championship Group Stage.

How can Superteams Work

Superteams CAN work. However, it takes a deeper connection between the players and a level of familiarity within the team to be able to find a working formula despite having multiple star players on the team. LoL superteams are extremely hard to pull off but when they do, it can be very rewarding for the region. Unfortunately, we don’t have any insight on what actually goes on within the team’s structure to give us more information on what’s causing them to fail.

We can only speculate on how superteams can work but no matter what we say, it can’t be the instant solution that can fix this curse. The best advice is not to make a superteam but a lot of esports organizations care more about sales and popularity rather than having an actual competitive roster. This is why a lot of teams are willing to invest a lot of money to buyout a very popular player but don’t give them the resources to actually succeed in the tournament.

There’s no reason to ban the creation of LoL superteams as most of the teams that have recently won international tournaments weren’t superteams. Superteams also make the esport interesting to watch since it gives fans someone to be afraid of or support.

I BROKE THE HEALTH RECORD WITH HEARTSTEEL UDYR! (HIGHEST DAMAGE TOO!)