Home League of Legends Blog Vamos: Brance burns two words into the minds of Fnatic as LOUD picks up another win at Worlds 2022 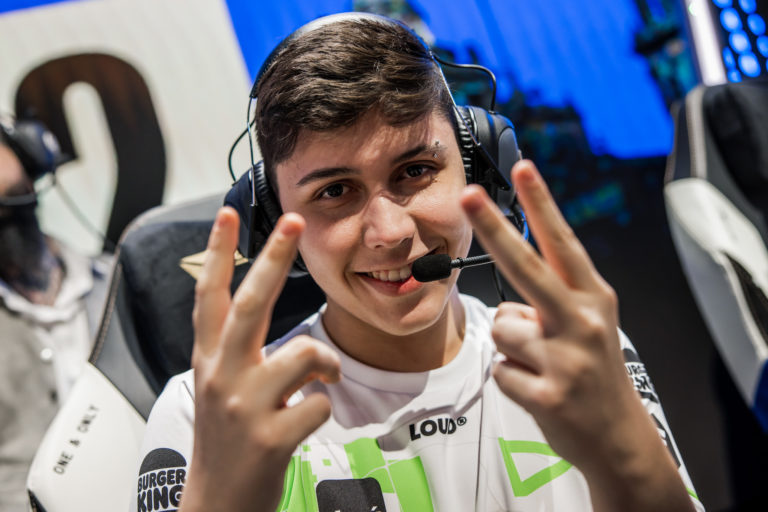 If there are two words to sum up today’s play-ins match between Fnatic and LOUD at the 2022 League of Legends World Championship, they’re “bot gap.”

The roaring support of the CBLoL representatives continues to echo around the Arena Esports Stadium and on social media following a dominant win over the LEC’s third seed.

Though Fnatic remains at the top of group A, this marks their first loss in the play-ins stage thus far. Fnatic struggled particularly in their bot lane, a place that has become a crucial part of many of their dominant victories, while the rookies of LOUD used that weakness to shine.

Steamrolling one of the best bot lanes in the world is one way to make a name for yourself, but predicting that you’d do so and preemptively writing “Bot Gap” on your arm in sharpie is another.

LOUD’s bot lane pairing, Brance and Ceos, once more opted for the powerful combination of Miss Fortune and Amumu, which they have now utilized in all three games at Worlds. With a bit of roaming from mid laner Tinowns and jungler Croc, Ceos was capable of locking down Fnatic’s carries with precise bandage tosses that quickly cemented an early lead for the Brazilian team.

Yet it was the first time the LOUD bot lane caught out their opponents without any help that Brance flexed his gameplay expertise. Looking straight at the camera, Brance lifted his sleeve to show that he had written “Bot Gap” on his arm, predicting that he and Ceos would succeed in the matchup.

Even when Fnatic engaged on the massively-fed Miss Fortune of Brance, Ceos jumped right in to lock them down with more bandages and ultimates, giving Brance room to walk away, then turn right back around to barrage enemies with Bullet Time.

Brance and Ceos shared a combined 10/3/21 KDA as the Fnatic nexus exploded, never giving Upset and Hyllisang the opportunities to carry that have allowed the LEC’s third seed an undefeated play-ins run up to this point.

While most of the action remained in the bot lane, a demon was slowly scaling in the top lane, preventing Fnatic from shutting down their target in Brance.

Once again, Aatrox was back on the Rift, this time in the hands of LOUD’s top laner Robo, ready to celebrate yet another “Rob’s Day” alongside his team with a victory. This is the fourth unique champion Robo has piloted at Worlds thus far and yet another pick that has allowed him to flourish in a sea of the best top laners in the world.

The sheer amount of healing present for Robo, complete with a Goredrinker and innate self-sustain with Aatrox’s abilities, allowed the top laner to enter fights as yet another form of initiation for the team—while also dealing immense damage in the process. When Fnatic appeared to be recuperating from lost fights under the protection of their own turrets, Robo motioned for LOUD to jump right back in.

Becoming such a huge frontline threat forced Fnatic to heavily target Robo when they believed he was solo farming, which backfired immensely as Robo simply healed off the damage from their efforts and welcomed his teammates into the fray.

While he couldn’t get any more kills for himself as the game concluded, Robo opened the door for Brance to stick even more bullets into the enemy team, allowing the rookie ADC to shine further in his first Worlds appearance.

LOUD seek to carry this momentum into tomorrow, where they’ll face Chiefs Esports Club from the LCO. Should they earn another victory for themselves, LOUD are capable of making it to the final two days of play-ins, where they can become the first CBLoL team to ever qualify for the group stage.

Armed and ready: Isurus prepare Teemo for their Worlds 2022 match against RNG