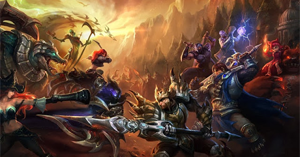 Are you annoyed at all the unkillable Heartsteel champions on the Rift? Do you just hate tanks in general? Try out this team composition that shreds thanks down to itty bitty bite-sized pieces and uses them as their personal source of food. AOE Damage: B
Crowd Control: B
Difficulty (1-5, 5 is hardest): 3
Diving Power: B
Dueling Power: S
Initiation: B
Poke Power: B
Pushing Power: S
Sustain: B
Synergy: A
Waveclear: A

Are you annoyed at all the unkillable Heartsteel champions on the Rift? Do you just hate tanks in general? Try out this team composition that shreds thanks down to itty bitty bite-sized pieces and uses them as their personal source of food.
Check out how to play it below!

Kog’Maw can be replaced with Vayne here but overall the raw damage he puts out tends to be higher than Vayne over the course of a team fight. Kog’Maw also has more team tank shredding at his disposal, further amplifying this team comp’s effectiveness.

While Sylas may not be a traditional “tank-slaying” type of champion, he’s also largely unkillable by tanks as a result of his massive healing abilities. Furthermore, tanks in the current meta tend to have very powerful ultimate abilities, making Sylas extremely potent against goliaths.

No Lulu? That’s right, we’re going with Brand for this team composition for maximum damage output and a more offensive laning phase. This team composition is relatively low on AOE damage and Brand works wonderfully for doing extended percentage damage through team fights.

While Amumu may be a better AOE crowd-control pick, Trundle excels at tearing apart singular problem tanks. His passive and ultimate screams anti-Heartsteel with their enemy health scaling and the stronger enemy tanks are, the stronger Trundle gets.

A champion with an incredibly beautiful synergy with Divine Sunderer, Fiora absolutely shreds tanks. Not only does she deal bonus damage based on opponent health amounts, but she also deals bonus TRUE DAMAGE scaling up against opponent health pools. Talk about using enemies as your own personal health battery!

Countering this team involves good use of anti-healing, sustain, and crowd-control.
Here is an example team that may succeed:

What do you think about this team composition? Got ways to improve on it? Better ways to beat it? Comment below!

CLG runs back full 2022 League roster for next season