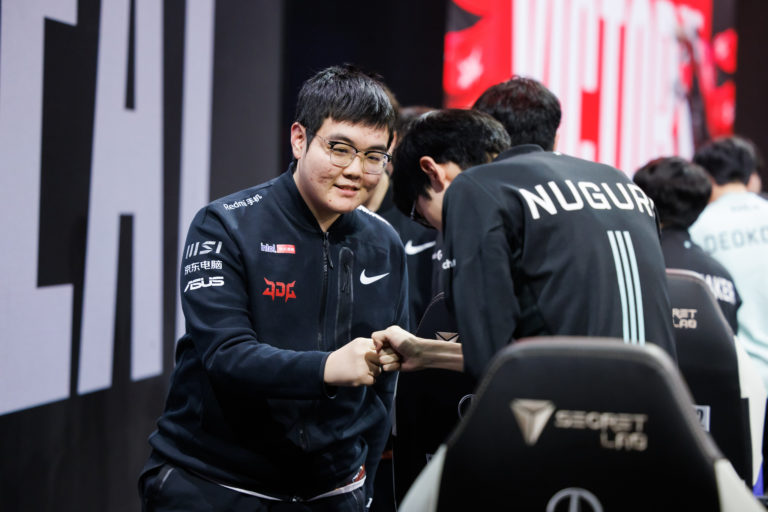 Coming into this year’s League of Legends World Championship, Jingdong Gaming of China and DWG KIA of Korea had only played two games against each other. But after their three games this past week, there’s no matchup League fans are hungrier to see again.

When JD Gaming and DWG KIA met on Oct. 8, their initial contest was immediately christened as the “game of the tournament” up until that point. Their back-to-back games the following week (notably their first-place tiebreaker) immediately surpassed their first meeting and earned that “game of the tournament” moniker for itself. If you were to make a top-five list of the “best games at Worlds 2022 so far,” all three of JDG and DWG KIA’s group stage games would be on it.

But the writing was on the wall for a potential thrilling rivalry all the way back when the two teams met for the first time in their respective franchise histories in 2020.

That year, DAMWON were a “team of destiny,” and it felt like no one at that tournament was poised to stop them from winning Worlds outright. That season, they posted an individual game record of 51-8 across the LCK Summer Split and World Championship on their way to lifting the Summoner’s Cup.

One of those single-digit losses came to JD Gaming in the group stage of Worlds. The Chinese then-second seed was just the fourth individual team to take a game off the eventual world champions at that point, setting up a rivalry of titans that would spill over to the international stage two years later.

At this year’s tournament, JDG and DWG KIA met in the group stage yet again—this time with unfinished business and a tied head-to-head coming into the tournament.

JDG vs. DWG by the numbers

JDG and DAMWON’s first meeting since 2020 was one of the tightest games in recent Worlds history, with the two teams finishing last week’s initial game tied in Barons and dragons, and the gold lead changing hands eight different times across 36 minutes.

Their tiebreaker game the following week was easily the bloodiest game of the group stage, with 45 kills across the board in 34 minutes. Every time you looked up, the two teams were engaging upon each other in teamfights, eventually giving way to two individual players (369 and Deokdam) having 10 kills apiece. In 2020, their second group stage game (the one that JDG won) was the bloodiest game of that World Championship, too, with 43 kills in 37 minutes, according to League stats site Games of Legends.

Across their five all-time games, JDG and DWG KIA have never had fewer than 27 combined kills in a single game, while averaging 35 total takedowns between them.

At Worlds 2022, JDG were the only team to average over one combined kill per minute during their group stage games, while DWG KIA weren’t far behind at 0.90. Those marks ranked first and third, respectively, among all teams at Worlds. Additionally, DWG KIA in particular are making a push to play in much bloodier games (partially due to JDG’s influence). Their combined kills per minute have jumped substantially since the LCK Summer Split (0.67), according to League stats site Oracle’s Elixir.

Should DWG KIA and JDG run the gauntlet and win the two best-of-fives in front of them to set up a rematch in the final round of the tournament, though, it would add fuel to a rivalry that’s quickly earning its wings. While the two teams still have a long way to go until they reach the number of games that international rivalries like the T1/Edward Gaming or Royal Never Give Up/Fnatic matchups have accumulated through the years, JDG and DAMWON could be meeting a lot more often in the coming years if they keep playing like they are now.

And honestly, no League fan should be opposed to that.

JD Gaming will return to play at the Worlds quarterfinals on Thursday, Oct. 16 against Rogue, while DWG KIA will play on Saturday, Oct. 18 against Gen.G.