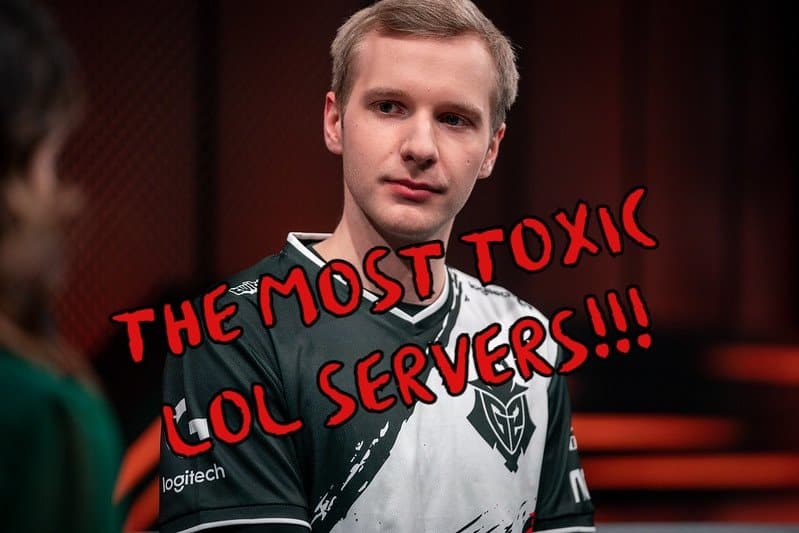 We all know that League of Legends isn’t exactly a game where people get together and make a positive impact on each other’s days. As a matter of fact, League of Legends is considered a very toxic game where some players try to intentionally attack other players for a variety of reasons. Today, we’ll be exploring the top 5 most toxic LoL servers that are notorious for giving the game such a bad reputation.

The Most Toxic LoL Servers

Let’s take a look at some of the most toxic LoL servers around the world that are notorious for having the worst playerbase that makes playing the game absolutely insufferable. While all of the servers in the world have their fair share of players with terrible personalities, there are some that have incorporated such behavior into some kind of culture that either forces a player to quit or influence them to contribute to the toxicity.

Unfortunately, unless you’ve played at least 12 months in every server in the world, it’s pretty hard to accurately rank which servers are more toxic than the other. As such, we’ll simply be listing servers who are well-known for being toxic and describing what it might feel like playing on that server. These are compiled from people who have given testimonies on what they feel like and from LoL forums that discuss how they feel playing on these toxic LoL servers.

The Garena servers are the first to be mentioned on our list and it comes to no surprise that the Southeast Asian region is once again called out for being toxic. This is because SEA is known for being intentionally toxic not just in League of Legends, but all of the online games they play in general. The culture is so deeply-rooted in the region that the toxicity is basically expected of them and it’s more strange for someone not to be toxic when they play.

In the Garena server, the players exchange hate speech, slurs, and insults like they’re trying to write poetry. Generic insults are considered weak and you are made fun of for “not being toxic enough,” so players are expected to be more creative in what they say. If you ask a player from the SEA server which server they think is the most toxic, they’ll proudly proclaim their own region like it’s some sort of badge of honor.

Europe West is also another notorious region in the League of Legends community with verbal abuse and intentional feeding being the main problems that the server faces every day. The European community mainly faces division, mainly because the server includes so many countries that speak different languages who are mostly forced to speak English. You can understand how that may have caused plenty of games to have miscommunication issues that eventually ended up evolving into a culture of toxicity.

The server is so toxic that most players have something called an “int list,” where they list all of the people that have intentionally thrown the game just to make the experience insufferable for other players. In the higher ELOs, there are a lot of players who enjoy making streamers and esports players suffer because they are fanatics of a specific organization that they think they they’re doing their favorite personalities a service by making the game a living hell for another person.

South Korea may come as a surprise to most people reading this list, but if you come to think of it, there’s no way the most competitive server in the world doesn’t become one of the most toxic LoL servers around the world. Players treat the game like a social standing, so anybody trying to ruin their experience by performing badly in a match will experience the wrath of their entire team with flaming and threats.

The South Korean community is very passionate about gaming and esports that it comes across as obsession. Many people in this country pay other players to boost their accounts to a higher standing because you can get ostracized simply for being in a lower ranked division. It’s also important to note that a South Korean citizen uses their social security number to create a LoL account, so they can’t create smurfs or secondary accounts like other players do.

Brazil is another region that is very passionate about gaming and esports. They love playing games and support their favorite teams like their own family on international tournaments. However, the Brazilian community is notorious for not being able to take criticism very well and that often translates to them clapping back. Internationally, that’s not really a problem but you can imagine how it ends up if a Brazilian gets criticized in their solo queue game.

The BR community is very harsh with their words, using death threats and other types of violent acts as a warning to others who try to mess with them. Players often take it too far in their games that some games just end up having two parties trying to threaten each other for a good majority of the game. They hate what they hate and when they do, they’ll say everything they can to make sure that you understand that.

North America is plagued with the most problems in the gaming community from blatant sexism, racism, and other types of hate speech in addition to notorious win trading, inting, and other types of acts that make people hate playing the game has caused most of the country to give up hope on the game in this region. It is undoubtedly one of the most toxic LoL servers around the world and a lot of people have come forward to ask Riot Games to solve it.

Players like Tyler1 were historically prime examples of this behavior, but he managed to reform himself to be less toxic in games (but not completely). The country itself is constantly being divided into political spectrums that can really seep into the experience. While many people just want to play the game, some just can’t help but make the experience insufferable for others.

The best-hidden secret weapons at the 2022 League World Championship