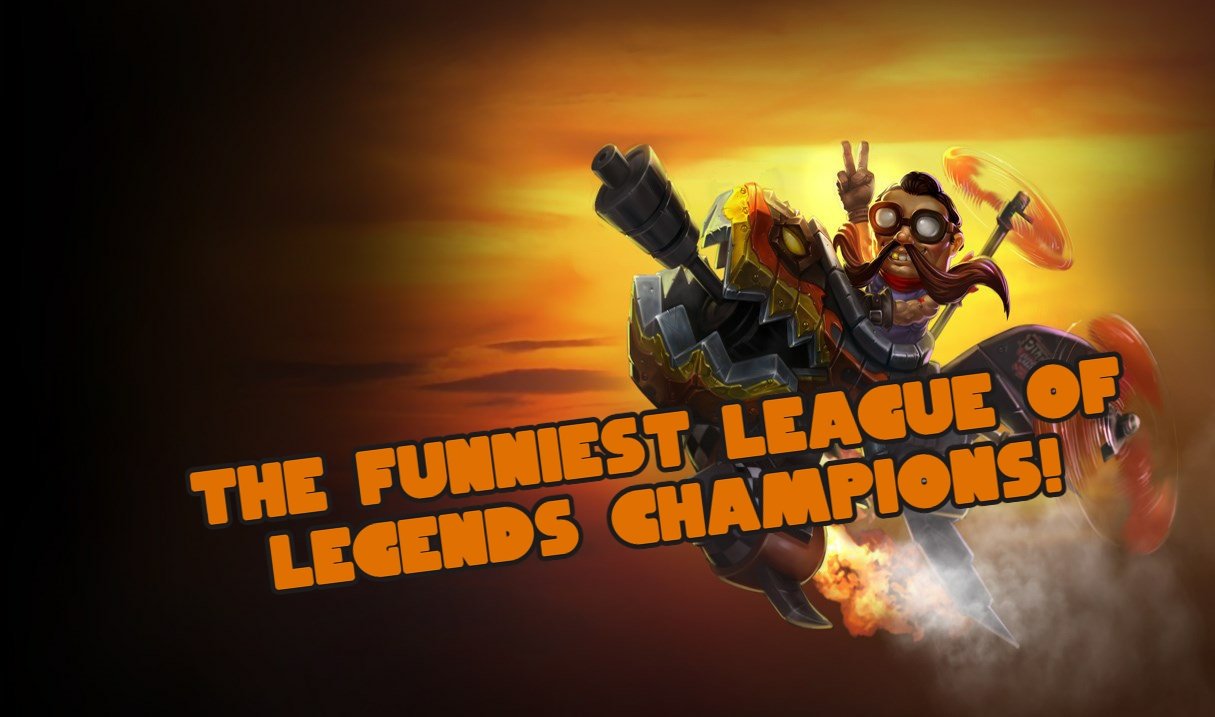 League of Legends is is a game that’ll take you on a rollercoaster of emotions once you get in the queue and play your matches. There are times League of Legends becomes toxic but there are a lot of moments where you can have fun. In honor of the laughs that we had when playing the game, we’ll be showing the top 5 funniest LoL champions that give us the most chuckles and giggles when we play them on Summoner’s Rift.

There are a lot of funny champions in the game that are designed to be some sort of comic relief. Others have funny quotes that can make us chuckle for a little bit if we’re willing to listen to them closely. However, in our list of funniest LoL champions, we’ll be taking a look at characters who have silly gameplay mechanics that can guarantee to make the game really fun… for us, at least but for the opponent? No so much.

The are the champions that we often see in highlights outplaying opponents and making them angry because it’s easy to make them a fool of themselves. As the player, we love to see our enemies not knowing what’s going on because the champion simply makes it a living hell for them to play. Now, let’s take a look at the top 5 funniest LoL champions to play if you’re looking to get a giggle off your gameplay.

Fiddlesticks was initially created to be some sort of comic relief but lore and visual updates have made him more of a nightmare-ish character. However, the silliness of his kit hasn’t disappeared and has become even more fun to play because of his unique passive that allows him to place clones of himself as wards in specific areas. The great part about these clones is that they will start moving when exposed, possibly getting a funny reaction off the opponent.

Fiddlesticks players will have experienced an opponent suddenly flashing away from one of their clones at one point in their lives. Higher ELO players may not fall for this trick, but unfamiliar players may get a mini heart attack from seeing the Fiddlesticks suddenly appear inside a bush. Sometimes, you may also catch your teammates getting the fright of their lives when playing against an enemy Fiddlesticks and that becomes an unforgettable moment for you.

Dr. Mundo has always been your classic airhead character in League of Legends and his aesthetics are already funny as they are. However, this champion is a true clown in his gameplay as you can play with your opponent and make them frustrated with your champion. The first way is to keep throwing cleavers at them, which is very annoying since it has a very low cooldown and deals a ton of damage. Watch your opponent dance around as you keep throwing your Qs at them when they’re low health.

Another reason why Dr. Mundo is one of the funniest LoL champions is because he’s so hard to pin down. As they say, Dr. Mundo goes where he pleases and that’s not even an exaggeration. He gains healing and movement speed with his ultimate ability, making it very hard to take him down. It’s very funny seeing your opponents use all their abilities to pin you down and you just simply walk away at them like nothing happened.

Kled is another comic-relief character that has an eccentric personality paired with a silly mascot that makes him such a lovable champion. His gameplay is also funny, but not in a sadistic way like the others we just mentioned. His reliance on Skaarl and his capabilities as unmounted Kled make for a bit of a silly reaction that can leave you laughing your lungs out when you start panicking when you suddenly dismount at the wrong time.

It’s also pretty funny to see your opponent get mad when they’re about to kill you when all of a sudden, Skaarl returns to give you your health back. It’s pretty cool that this champion has the courage mechanics since it gives him a unique playstyle that you simply can’t get from other champions. He can dance around your opponents and lead your entire team to charge at a single opponent that was minding their own business.

It’s probably unsurprising that Teemo is on this list, but you gotta admit that he’s a very funny champion to play. Sadistic players love to use Teemo because he makes all his opponents angry and annoyed that a lot of them simply turn off their computers and stay away from League of Legends for the rest of the day. He is one of the most annoying champions to play against for a reason and that is pretty hilarious.

Teemo can blind his opponents, causing their basic attacks to miss. Seeing a champion start slapping you but dealing no damage is can give you a ton of laughs. However, the funniest thing that could happen to them is when they try to hit the Blast Cone and they can’t because they’re blinded. The funniest part about Teemo’s kit is his mushrooms, that can make opponents rage when they accidentally step on one of them where some of them just simply die from the damage.

Shaco is undoubtedly the funniest LoL champion in the game with his design catered to playing with his opponents. Shaco players love to play with their opponents and watch them make a fool of themselves when they play against this champion. Luring them into Shaco boxes while pretending to be scared only for him to turn the fight around makes for a highlight moment that’s worth posting on social media.

The funniest part about playing Shaco is his ultimate that enables him to make a clone of himself. High ELO players can easily tell the difference but those in Gold and below will be frustrated at immediately not knowing which Shaco to hit, only for the clone to suddenly pop and deal a ton of damage. Going invisible to backstab your opponents can also cause a funny reaction.

Faker gives his thoughts on T1’s supposed ‘Group of Death,’ the team he wants to get revenge on at Worlds 2022, and more