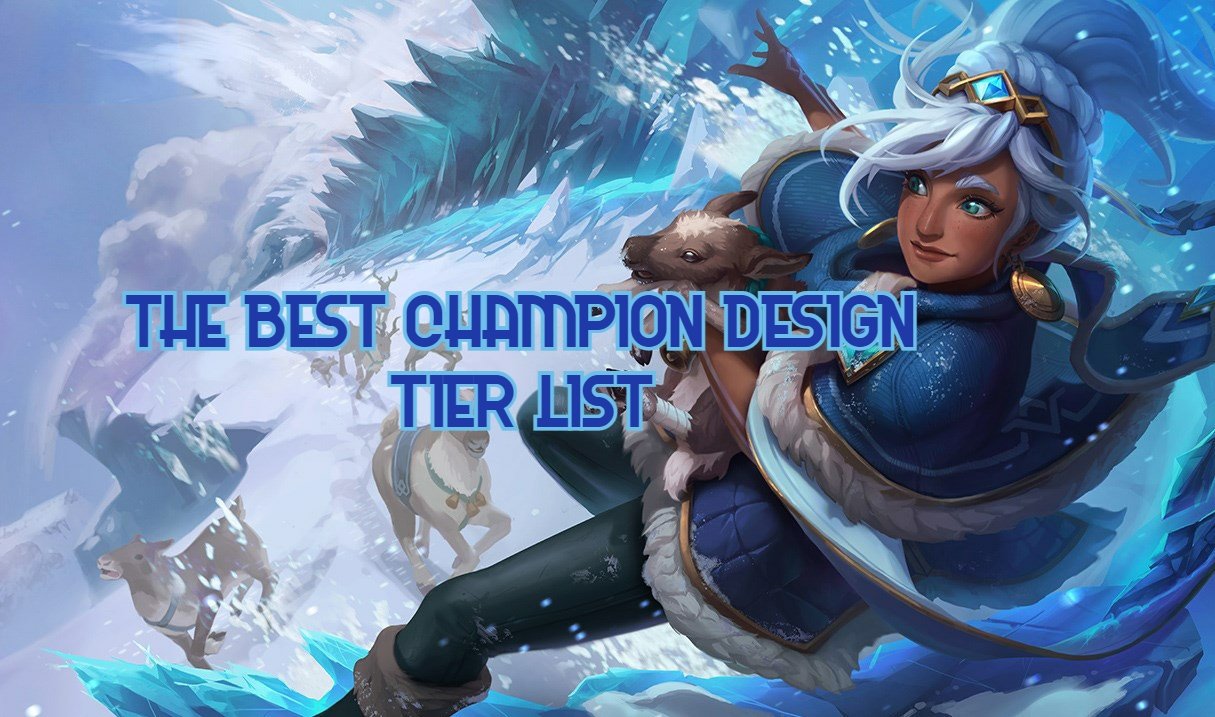 League of Legends’ champion roster is one of the most iconic list of heroes in video games with many of them being recognizable even outside the LoL community. With so many people both praising how Riot Games introduces some characters and criticize them at how they create really bad champions, let’s take a look at some of a tier list discussing the LoL best champion designs in their current iterations.

Let’s talk about the LoL best champion design tier list with every League of Legends character ranked according to their in-game design. When discussing their design, we’ll be ranking them according to their gameplay, overall theme, and how fun they are to watch and play as a champion. The League of Legends design them has given us so many champions to look at so we won’t be discussing them individually, but we’ll highlight the best example among the names on the list.

The most important thing to remember when determining which champions are considered the LoL best champion designs among all of the champions in the game is to take a look at them as the individual. That means that just because a champion is intended to be a tank, we’ll be giving them the benefit of the doubt despite their boring gameplay. Without further ado, here is our LoL best champion design tier list:

The S-Tier Champions are the pinnacle of League of Legends character design with their concept being very interesting, engaging, and gives players an overall goal to playing them. In fact, they each have a unique playstyle that allows them to establish their own identities whenever the players chooses them as their pick. Jhin is the best example among them because he’s completely balanced and provides ADCs a completely new way to play the game.

Picks like Yasuo may be controversial because the community claims to hate them as a champion, but it doesn’t take away from the fact that their design is simply iconic to the game. These champions are exciting to watch and offer so much diversity to the game by allowing the player to take control of their playstyle rather than having the champion dictate how they want the game should be played.

A-Tier Champions are amazing to watch and can provide really hype plays that provide game-changing results. They are proactive and commit to their themes while being able to establish their own identities as champions. Just like S-Tier champions, they don’t have any successful copycats that push them out of their own categories that make them such iconic characters in League of Legends as a whole.

The reason why these champions can’t ascend to S-Tier despite having all the same positive features as those above them is because they aren’t as flexible to play as those S-tier units. Their playstyles are not linear in any way but you can pretty much see the direction at which they are played as compared, making them just a little bit predictable. If you were to watch 100 games of these champions, you’d eventually get tired of them.

B-Tier Champions are probably the most tragic archetypes on this list. These champions are all given their own identities to exist but at the same time somehow they feel extremely lacking in that aspect because their gameplay seems unimpressive and somewhat generic. These champions feel like they are what Riot Games uses to recycle gameplay mechanics and can successfully do so because their abilities are easy to replicate.

They are not quite bad champions because they are still recognizable with their characters being iconic in what they do. They do try to take what makes S and A tier champions succeed but they fall just short in every aspect to give them the same love and adoration that players have when playing champions on the tier above them. Champions like Pantheon have a cool concept but their skills feel like they are ripoffs of other units in the game.

C-Tier Champions are units that do have their own identity that make them unique, but those identities actually make them look really bad. While it’s good to have your own identity, it can really hurt you if the champion designers didn’t really think a lot about how to make them more proactive. Most of these themes are simply boring and predictable with linear playstyles and straightforward identities.

Being honest to your own concept is still a positive. Unfortunately, they needed a bit more love from Riot Games because a lot of them aren’t exactly exciting to watch. Most of them also simply exist to press their ultimate ability and hope that they win the game off of doing so. The other models are simply outdated for the current iteration of League of Legends that makes them look out of place as compared to the newer models.

D-Tier Champions are basic champion designs with linear gameplay and no identity at all. They are true to their role rather than having their own identities and exist only to fulfill their gameplay condition in the lane that they are playing on. Even their abilities are extremely underwhelming in their viewability since they don’t provide anything exciting to the game.

These champions we probably designed to fill in the gaps in terms of what the game currently needs. Diversity for diversity’s sake rather than giving them their own character design that separates them from the rest. They are not tragic because they are simply created perfectly for the job they’re meant to do. Similar to having a wall painted plain white.

Failed champion designs are complete disasters in League of Legends. They were created to have their own identities but completely miss the point with forced gameplay mechanics that don’t really offer anything to the game. In fact, they just make the game painfully dull and annoying to play whether you’re playing them, playing WITH them, or playing against them.

We can remove Udyr from this category since he’s getting a complete rework that actually adds more uniqueness and excitement to his identity, but the old Udyr model was simply tragic. Yuumi is arguable the most hated champion in League of Legends because she makes the game unreasonable painful for very little effort. These champions need complete reworks as soon as possible so that they can also be included as the LoL best champion designs in the game.

Can Riot Games Ever Make League of Legends Balanced?