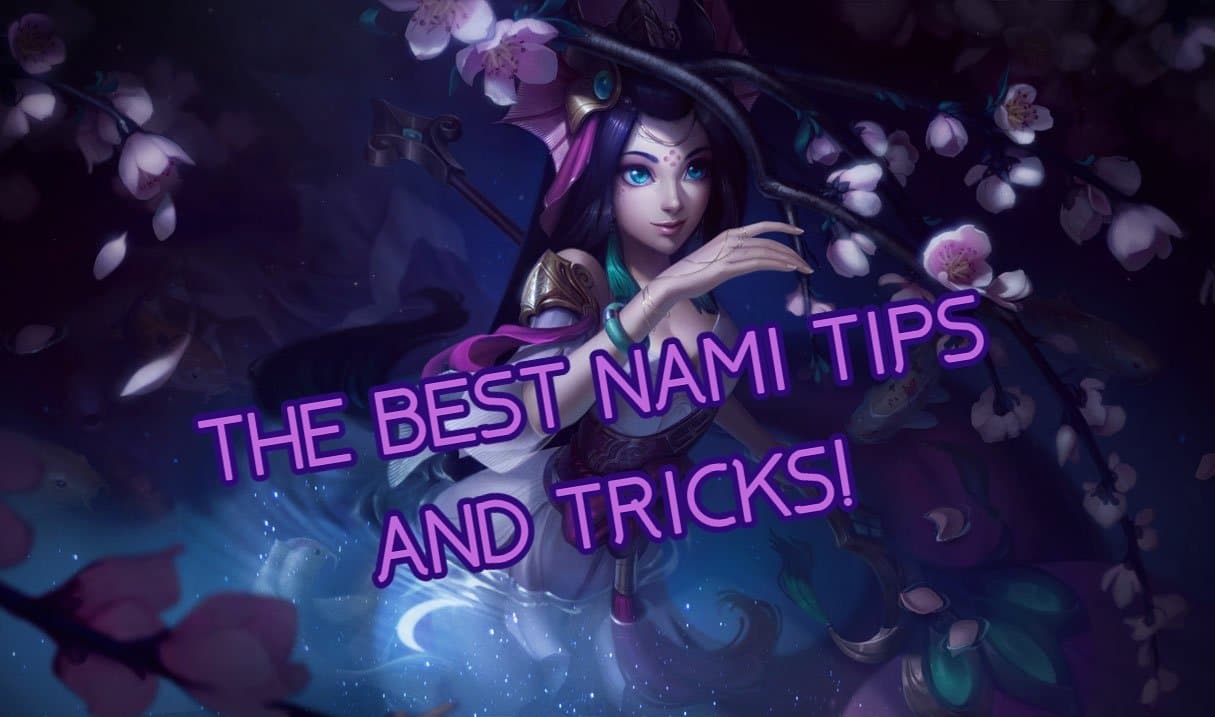 Nami is one of the top enchanters in League of Legends with powerful healing, buffs, and crowd control abilities that make her a menace in both teamfights and laning. The champion is one of support players’ favorite picks, especially if they think that the laning phase will be relatively safe. Today, we’ll be sharing some of the best Nami tips and tricks that will give beginners an easier time learning how to play this champion in their games.

Nami, as a support champion, provides everything that you want from an enchanter. Her glaring weakness is that she has one of the lowest defenses in the game, but her utility makes up for that by giving her powerful support abilities that make it a pain for her to lane against. When she’s used properly, she can be quite an impactful pick, catching out-of-position enemies while keeping the team alive and healthy which we’ll be discussing more on this Nami tips and tricks guide.

Nami pairs really well with Lucian as they both unlock each other’s full potential as one of the strongest combos in LoL. We hope that these Nami tips and tricks give players more incentive to use the champion, even outside being paired with Lucian. Overall, she can be useful in every situation especially if you’re pairing her with a hyper-aggressive champion in the bot lane to get some early kills and eventually snowball the game.

Set Your Teammate Up With a Speed Boost!

Nami’s passive allows allies to gain bonus movement speed after being affected by one of her abilities. While it may seem like a simple ability, movement speed is one of the most impactful stats in League of Legends, especially for carries who are looking to catch enemies who are trying to run away and escape enemies trying to kill them. This ability can help allies in both endeavors, giving them a burst of movement speed that can create necessary distance that will make the difference between life and death.

The most common ability to use to buff allies using this skill is her E ability – Tidecaller’s Blessing – which sets the ally up for bonus damage and making them move faster. Remember to coordinate with your ally when trying to boost them to maximize your kill threat. If you don’t share basic comms with the ally, preferably buff them when they start moving toward an enemy champion. Just watch how they behave and time your buffs accordingly.

Hit Those Bubbles Every Time

The hardest and most crucial part about playing Nami is being able to hit her bubbles (Q ability – Aqua Prison). It’s one of the most difficult skillshots to land because it has a very slow animation that makes it easy for enemies to dodge. Nami players who can’t land Bubbles are often a detriment to the game, making it difficult for the allied ADC during the laning phase and making her almost useless throughout the game because a lot of her power comes from catching enemies with the bubble.

There’s no easy way to master hitting those bubbles aside from practicing for a long time. A good mentality to have is to predict where the enemy will move rather than using the bubble on where the enemy is currently standing. By observing the enemy’s behavior, you can predict where they might move next and use that information to use your bubble and catch an enemy off guard. Don’t make it obvious that you’re using a bubble by hiding in a bush or while the enemy is preoccupied with something else.

Nami’s W ability – Ebb and Flow – is another important part of her kit. Unfortunately, a lot of less experienced players aren’t able to maximize its effects to deal maximum healing and damage. Remember that this ability bounces to Nami, an allied champion, and an enemy champion once each in any order. The ideal way to use this ability is to be able to use it on all three targets so that both you and an ally becomes healed while an enemy champion takes damage.

Choose the Right Targets for Buffs!

We already talked a bit about Nami’s Tidecaller’s Blessing Ability in one of our previous Nami tips and tricks. Now that you understand that it has huge potential as a means to grant allies bonus movement speed, let’s not forget that it also has the ability to give their 3 next auto-attacks and abilities bonus magic damage. This means that your ally will be hitting heavy and they should always maximize your usage of this ability.

Not all champions are a great target. You preferably want to buff an ally that you want to take the kill credit. It’s always wise to target your AD Carry as the primary target but you can also choose a fed mage. The most important thing to keep in mind is to use this ability on a champion that will commit to the fight.

Seal the Deal with a Huge Tidal Wave

Nami’s Ultimate ability – Tidal Wave – is one of the most impactful ultimates in the game. It can catch out multiple enemies at once and set up your allies for a huge speed boost. When the Tidal Wave passes through allied champions, they get double the movement speed bonus from your passive ability, meaning it acts like a rallying cry to boost your team’s ability to fight.

Nami should always stand at the back of the fight since she’s an enchant. This is especially true if your ultimate is active and you’re looking to engage the enemy in a teamfight. Stand behind you allies and angle your ultimate ability to hit multiple important targets so that they can instantly follow up for a huge teamfight.

From 2023, Oceanic League players will have PCS residency