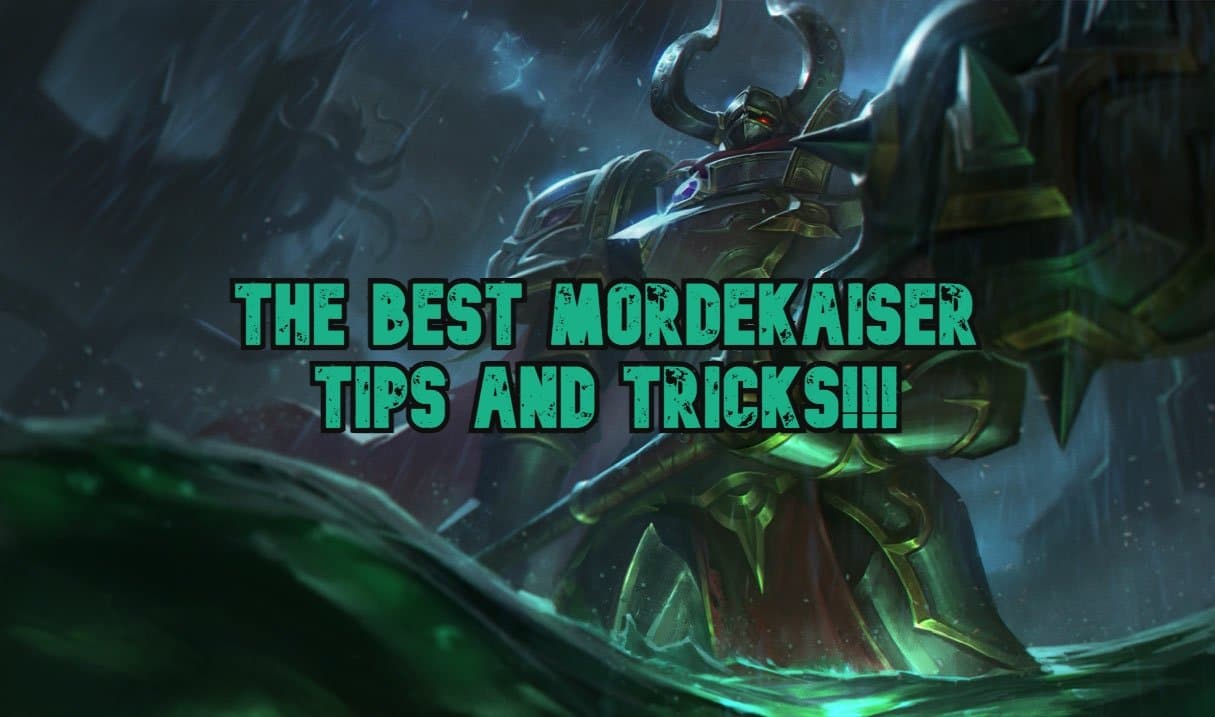 Mordekaiser is known as the raid boss of League of Legends whose unique skill kit allows him to be a difficult champion to fight. However, it takes a lot of mastery to learn how to play this champion and not every one can start 1v9’ing the enemy team the first few teams they play this champ. That’s why we’ll be sharing some of the most useful Mordekaiser tips and tricks that will help you master this champion faster.

Mordekaiser is a champion with a lot of tricks up his sleeve and there are many combos that work when trying to get into a fight. The most annoying part about Mordekaiser is that it’s extremely hard to gank him or isolate him since he has a powerful ultimate ability that allows him to turn the fight in his favor. All of them will be talked about in our Mordekaiser tips and tricks that we gathered from advanced players who main this champion.

We’ll be talking about Mordekaiser and how his kit makes him one of the most powerful duelists in League of Legends. He received one of the best champion reworks in League of Legends. However, it’s also easy to make a mistake on this champion by messing up the early game where he is the weakest or messing up his important combos. These Mordekaiser tips will ensure that doesn’t happen.

Mordekaiser’s entire kit revolves around isolating enemies, but that doesn’t mean he can’t take on the entire enemy team by himself. However, in the early stages of the game, it’s a good idea to isolate enemies by making sure that there are no allies, minions, or other monsters near them when you’re trying to land your Q – Obliterate – ability. Remember that this ability deals bonus damage when only one unit is hit by its effect.

The best way to isolate enemies is by clearing out minions or pulling them into your Death Realm (R ability). Usually, players clear the wave by using their E and Q abilities to harass the enemy champion and eventually go in for the kill when there are no minions left. Additionally, Mordekaiser’s passive ability makes an excellent way to clear the wave, which is activated when you land three or more abilities or attacks on an enemy champion or monster.

Mordekaiser’s W – Indestructible – ability has two effects which is the Shield (initial activation) and Heal (recast) with the amount depending on the potential shielding he has acquired in his resource bar. Players should always just use the heal recast all the time. When you’re in an active fight, it’s better to leave the shield active rather than recasting it because factors like anti-healing can decrease the effectiveness of this ability.

The healing recast is better when you’re not in active fight and you’re simply going in for short trades to get in some damage while building a health advantage over your opponent. If you have full health, remember to keep your resource bar filled up so that when somebody tries to launch a surprise attack or you become forced to engage onto an enemy, you’ll always have the advantage because you can mitigate a ton of damage with your shield while you “obliterate” their carries.

It’s Not Always A Good Idea to Pull Enemies!

Mordekaiser’s E – Death Grasp – ability is a great way to close the distance against enemy teams. A good combo to learn is casting his E ability and combining it with his Q ability to maximize the damage dealt in one shot. Try to use this combo on enemy minions during the laning phase and you should be able to master it once you get into an actual fight with an enemy champion. Pulling enemies in can help you apply auto-attacks that activate your passive ability faster.

Even though it’s encouraged that you try to pull enemies near you, it might not always be a good idea to blindly use this ability in every chance you get. Remember that they pull enemies in closer in a fixed distance, so you might accidentally pull a fed member of the enemy team towards your allies and give them a better chance to fight. If you’re familiar with playing Thresh, remember that you can also use this ability to push enemies away by using this ability backwards.

We talked about Mordekaiser’s passive ability a lot in our other Mordekaiser tips and tricks but some players who hasn’t seen this champion might not know what it looks like. Mordekaiser’s passive ability releases a whirling aura around him that deals magic damage and activating Conqueror (his preferred Keystone of choice). This is activated when you manage to land a combination of three basic attacks or abilities on an enemy champion or monster.

This ability’s duration is extended as long as Mordekaiser is damaging an enemy champion or monster. This means that it’s a good idea to keep enemies within your proximity, to maximize the damage you deal and make it impossible for them to not attempt to escape. Once you manage to activate your passive, don’t be afraid to take a fight whenever you can if you think you even have the slightest chance of winning. It’s a good idea to optimize your settings to use this efficiently.

Mordekaiser is designed to be a duelist so even though his abilities can deal AoE damage to multiple targets, it is better if you choose one enemy champion at a time to focus on to become more efficient in a fight. This is especially true when using his ultimate ability – Death Realm – to pull enemies in a closed arena for a few seconds where you will be dueling them in a 1v1 fight while stealing a percent of their stats.

When choosing champions to pull into your death realm, you should never pick supports or extremely fed enemies who are nowhere near getting killed. It’s also a good idea to avoid enemies with extremely high mobility since it can be hard to win against them if they’re able to dodge all your attacks consistently. You can also use this ability to isolate the enemy jungler while contesting an objective so that they can’t use their smite to secure it.

I’VE CREATED A MONSTER! This Might Be The STRONGEST Build EVER! (MOST DAMAGE DONE/TAKEN!)