Home League of Legends Blog The Best Karma Tips & Tricks For Beginners For All Roles! 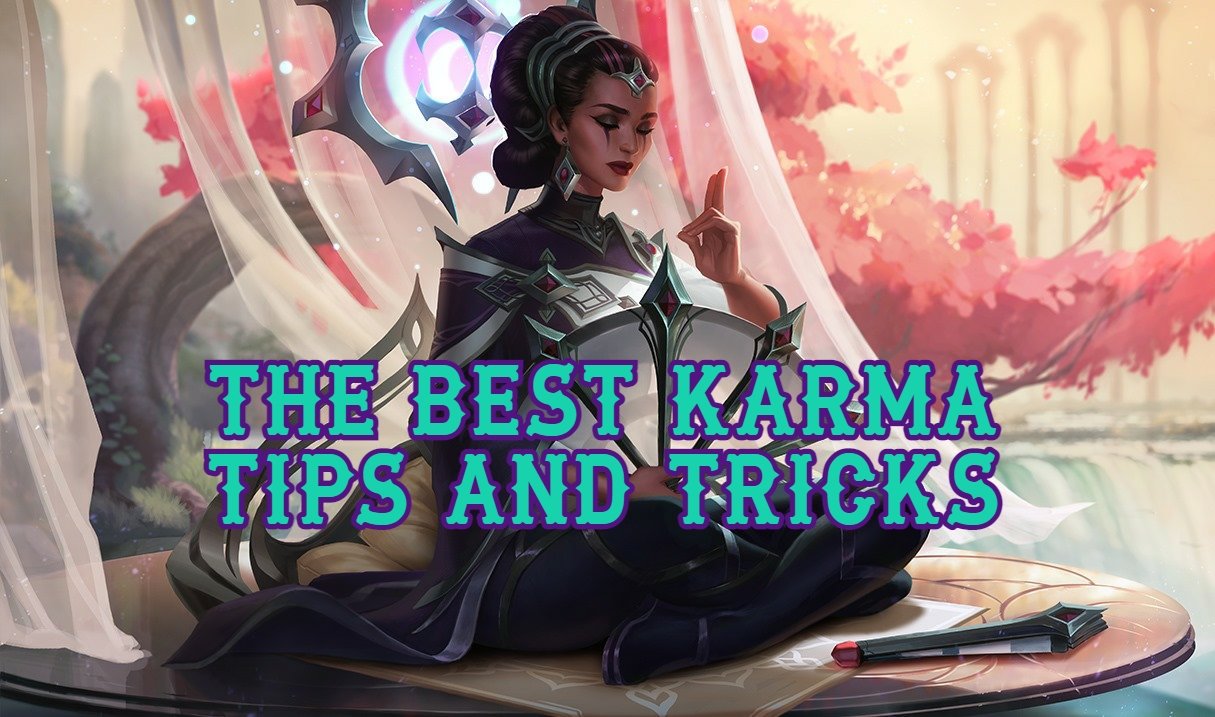 Karma is one of the most hated supports in League of Legends because of her oppressive nature that allows her to single-handedly dominate the lane as either a solo lane champion or support. Regardless of which role you want to use her in, her playstyle remains the same. We’ll be sharing some of the best Karma tips and tricks that will help new players understand how to use this champion easily.

The Best Karma Tips and Tricks

Karma may seem like it’s only poking down enemies but it takes a lot of mechanical knowledge and practice to be a decent Karma player. Learning advanced gameplay mechanics is a prerequisite to mastering this champion but even a beginner can be good at this champion with a little practice. These Karma tips and tricks aim to introduce some important points that players need to keep in mind when trying to play her in a real game.

Karma is an aggressive powerhouse in the laning phase and a very powerful support in the mid to late stages of the game that can keep her allies alive in crucial moments. However, there are so many things to keep in mind that correct decision-making plays an important role depending on the fight you want to take. Luckily, we’ve had some Karma mains share with us the best Karma tips and tricks that is guaranteed to help you no matter the role you play her as.

Blast Them Off the Lane!

Karma’s Inner Flame ability (Q) is one of the most powerful basic abilities in the game. It’s a poking ability that has a relatively short cooldown that deals a ton of damage. Empowering this ability causes it to explode and leave an AoE field that slows down the ability and deals additional magic damage. This is very useful at harassing the opponent and resetting the cooldown of your ultimate ability so make sure to spam it every chance you get.

Players using Karma shouldn’t be picky at using this ability and just throw it out any chance they get. As a support in the laning phase, you should always use this with your ultimate to deal a ton of damage on the enemy bottom lane. This skill is so oppressive that it essentially forces your enemy off the lane often that they are forced to miss out on a lot of creeps. Just be careful in your positioning or the opponent might turn your own aggression against you!

Karma’s Focused Resolve ability (W) is a great ability but can be dangerous to use in the wrong hands. This ability allows Karma to tether herself to her opponent, if the tether stays for more than 2 seconds, the opponent is rooted. It’s easy for Karma players to make the mistake of trying to close the distance to prevent the enemy champion from breaking the tether by walking away but that can be a fatal mistake that can be punished.

Kiting is a good way to ensure that your tether stays active while you maintain a safe distance. The idea is to tether the opponent and match their movement from a safe distance. Karma players want to stay just a little bit away from max range so that it’s difficult for short-ranged enemies to hit back. Watch the opponent’s champion behavior and you can determine if they’re trying to run away or trying to move towards you. Move back and forth to confuse them and eventually get the root.

Learn How to Self-Cast

Self-casting is an important skill that players need to learn when playing a lot of champions, especially enchanters like Karma. For this champion, her Inspire ability (E) is useful at protecting her allies but is also important that you can self-cast at a moment’s notice. Karma likes to play at the front of the fight because she tries to tether her opponents so it’s a good idea to be able to use her E ability on herself readily to block out damage or be able to gain extra movement speed to get away or get closer.

You can change your League of Legends settings and hotkeys to make it easier to use your self-casting button. Most players settle for the Alt + Skill Button, which is the default command for self-casting, but personally use the Shift button since it’s more accessible. Once you master self-casting your abilities, you’ll be able to play a lot of champions more efficiently, especially champions like Lulu who use mechanics like these a lot.

Karma’s unique feature is that she has access to her ultimate ability at the beginning of the game. Her ultimate ability allows her to empower any of her basic abilities at a 40 second base cooldown. However, damaging an enemy with her Q or W ability will reduce this cooldown by 5 seconds thanks to her passive skill. This is why it’s a good idea to spam your abilities at your enemy champions to make sure that your empowering your abilities and dealing a ton of damage to the enemy.

The most basic way to reduce your cooldowns is to use your Q ability to blast the enemy off the lane. However, you can also use your E ability since it damages the enemy at the beginning of the tether and at the end. During the laning phase, you don’t need to complete your tether to root the enemy since the initial damage is already helpful in maximizing the damage that you deal. Juggling your empowered abilities is the key to victory.

Which Skills to Boost with Your Ultimate?

Knowing which abilities to empower using Karma’s Mantra ability (ultimate) is the key to playing this champion at a high level. A lot of our Karma tips rely on using an empowered ability at the right moment. Most players like to spam Q to deal a ton of damage but that isn’t always the best decision. In teamfights and during the laning phase, it might be a good idea to spam your empowered Q to deal damage to enemies but once you get to the mid to late stages of the game, that all changes.

The empowered Q is useful for dealing poke damage before a fight begins. Using your empowered E is much more valuable in teamfights because your damage isn’t really relevant to the fight as compared to being able to shielding your entire team. Empowered W isn’t really something that is used often unless you’re playing solo lane and you need to lifesteal while dueling against an enemy champion. Otherwise, your best option is always either just Q or E.