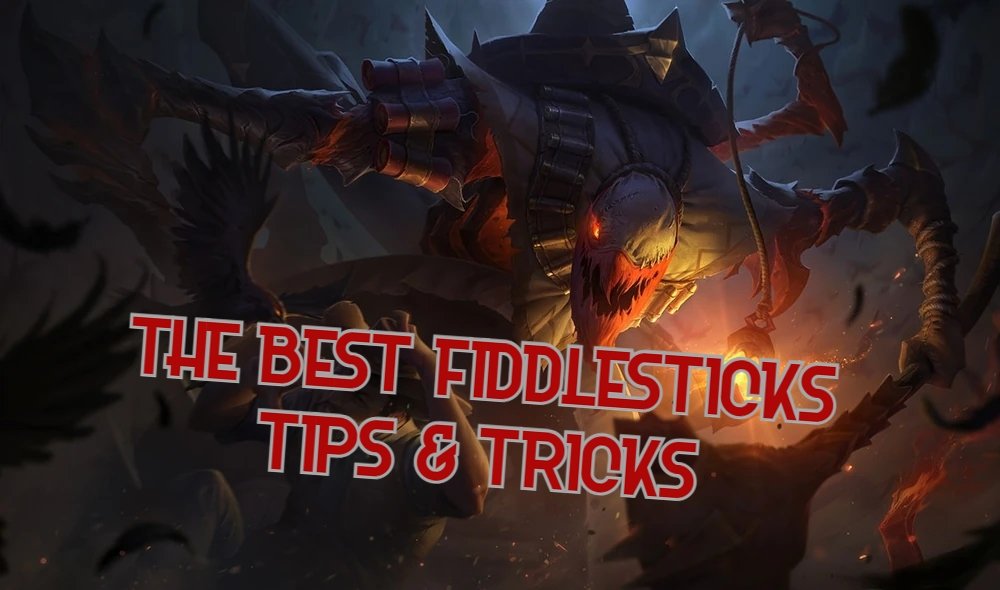 Fiddlesticks is a terror on the rift and is becomes a huge nightmare in the jungle and in teamfights. He may seem a little clunky to play but is actually one of the most impactful champions to play in both solo queue and premade games with friends. We’ve prepared some of the best Fiddlesticks tips and tricks that will help beginners learn how to play this champion as a junlger or support champion.

Fiddlesticks has a unique playstyle that revolves around his lore-theme of being a person’s fear personified. As such, he likes to pop out of places you least expect, surprising the enemy and punishing them if they’re caught off-guard. He likes to play out of vision, only appearing when he has the intent to kill. This will be made more clear once you take a look at some of the our Fiddlesticks tips and tricks that we’ve prepared.

Fiddlesticks isn’t necessarily a hard champion to play because his mechanics are a bit simple. However, Fiddlesticks players need to be smart in how they play him because simplistic strategies simply won’t work and will devalue his role in the team. Remember that the most important thing to keep in mind out of all the Fiddlesticks tips is that you must be able to play around vision, which is hard to do if you’re not familiar with basic League of Legends macro.

Out of all the Fiddlesticks tips and tricks, there’s nothing more important than making sure that you’re always hidden in the darkness. The only way to do that is to clear the wards around the map and ensure that the enemy doesn’t have any vision around the most important areas of the map. Fiddlesticks’ job is to make sure that wards do not exist but it is important to coordinate with your team to help you with that mission by making sure that all 5 members are buying Vision Wards (pink wards).

You should make sure that your map is dark before you commit to a teamfight. Remember that Fiddlesticks’ abilities apply fear if he uses an ability while he is unseen. Luckily, Fiddlesticks has the best trinket slot in the game as his passive converts his trinket into Effigies. The Effigies can both as a vision ward and a sweeper for the area it is placed on. Make sure to always spread your effigies around important vision points to ensure that the map is dark.

Stay in the Darkness For Max Effects

As mentioned already, Fiddlesticks works best when hidden from vision. Even if you’re hiding in a bush or behind a wall, as long as the enemy can see you through wards or revealing effects like Twisted Fate’s ultimate or Ashe’s Hawkshot, the effects of your Q ability passive that fears the enemy champions will not activate. This is why it’s extremely important that you and your teammates clear as much vision as possible.

It can’t be avoided that you’ll be placed in an area where there’s constantly vision. If this is the case for your team, make sure to position yourself intelligently. Hiding inside a bush isn’t the only way to hide your champion from the enemy’s sights as there are many ways to disappear from the map. Also, you don’t always have to be hidden if the team needs you in a fight but you are definitely more useful when you suddenly pop in.

Fiddlesticks is the kind of champion to dive into the middle of the enemy team to dish out a ridiculous amount of damage. However, the biggest problem for this champion is that he isn’t a tank in the traditional sense so he’ll easily die while trying to dish out damage in the middle of a teamfight. Luckily, his W ability – Bountiful Harvest – allows him to siphon life from nearby targets to stay healthy.

When using this ability, it’s important to get as many targets as possible. Remember that there is no limit to how many targets Fiddlesticks can siphon life from so the more enemy units or monsters there are near him, the more HP he’ll gain per second. It’s also important to note that this ability refunds a large amount of its cooldown if the channel is completed, so don’t be afraid to complete the channel as it’ll allow you to dish out more DPS.

They Can’t Run While Silenced

Fiddlesticks’ E ability – Reap – is probably the most underwhelming ability on his kit but it still serves an important purpose. Silencing the enemy and slowing them for a good second can be enough to put them in a bad spot. It’s also a good ability to close the distance between you and an enemy so make sure that you use this ability often but not during your W channel as it can cause it to abruptly end, especially if you’re using it outside of the intended range.

A great application of Fiddlesticks’ reap ability is to cancel enemy’s channeling abilities. Teleports, charges, and power-up abilities can instantly be interrupted if you manage to use this ability at the right moment. This ability isn’t your main source of damage but it’s definitely helpful in controlling how many actions an enemy can do within a specific amount of time.

Fiddlesticks’ ultimate – Crowstorm – is one of the most powerful ultimates in the game when combined with his Q passive bonus. It deals a ridiculous amount of damage while forcing multiple enemies to get feared for an extended period of time. Whenever Fiddlesticks manages to use his ultimate at the proper timing and placement, it almost always ends up in a perfect teamfight victory.

Keep in mind that jumping into the middle of multiple enemies isn’t always the best idea, especially since this champion doesn’t usually build any tank item. Zhonya’s Hourglass is usually the item that makes this champion so broken because it forces enemies to run away from his AoE instead of trying to burst him down. Make sure that you have multiple allies nearby who can follow up and then target your ultimate to hit the entire enemy team.

Award-winning LCS mockumentary series “Players” is free on YouTube, but not for long

League Worlds to return to South Korea in 2023, according to report