Home League of Legends Blog Rogue stole the show in Group C of Worlds 2022. Can any of their opponents fight back in the second round-robin? 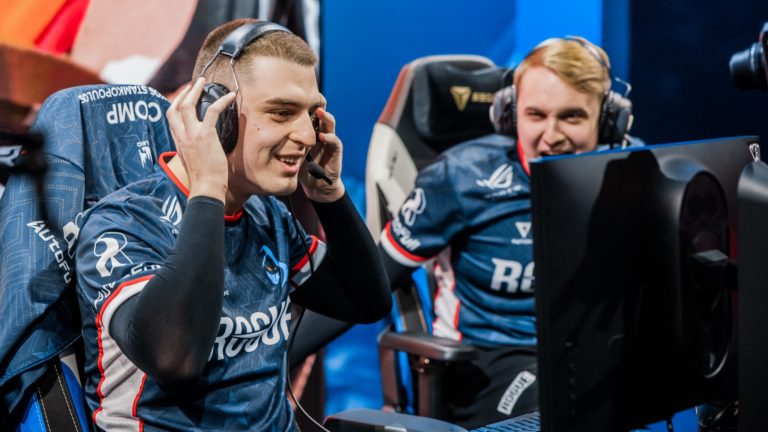 Every group at the 2022 League of Legends World Championship main event has had some surprises so far, with Group C being at the forefront.

Before the group stage began, Top Esports were expected to be one of the frontrunners for the Summoner’s Cup after their incredible run at the 2022 LPL Summer Playoffs, where they narrowly lost in the final to JD Gaming. TES were placed in Group C alongside Rogue, DRX, and GAM Esports, who were meant to battle it out for survival and second place.

The Chinese second seed dropped two games in a disappointing fashion in the first round-robin of the Worlds 2022 group stage. DRX have been improving with every game, though their playstyle is easy to exploit. GAM Esports haven’t impressed so far. And, at the top of the table, we have LEC champions Rogue, who performed stunningly well, and their 3-0 record is more than deserved.

Looking at the first four days of play at the Worlds 2022 main event, Rogue may be seen as the favorite to claim the first seed in Group C. But can we fully expect the rest of the group to play out this way?

For three years domestically and internationally, Rogue had been known for “Rogue Time.” The term means a period of time in each of the team’s games, mostly between the 15 and 30-minute marks, when the European squad gives away all their advantages made in the early game. As a result, the opposing team often came back into the game and defeated Rogue.

While domestically, Odoamne and crew proved they rid themselves of that bad habit by securing the 2022 LEC Summer Split trophy, it remained a huge question mark ahead of Worlds 2022. Could the team withstand the pressure on the international stage in New York? The answer is yes.

The early-game dominance isn’t easy to pull off against such opposition as Rogue have in Group C, though they still made solid early plays with the help of their jungler, Malrang. More importantly, however, Rogue have learned to stay in the driver’s seat once they get behind it. In teamfights, they go for high-risk plays, even though everything looks to be calculated. They play surprisingly confidently, and they should keep their heads high since they make it work in the end. Just look at the dragon and Baron fights against DRX and TES, where their kiting and positioning were on point.

Rogue reminded the world what it meant to be the first seed from Europe, a formidable opponent who shouldn’t be disrespected and are capable of taking over the group. If Rogue keep playing in the manner they showcased so far, a first-place finish should be expected.

TES were seen as dominating LPL representatives before the tournament started, while DRX proved in the play-ins that they can compete with the Chinese players by dismantling LPL’s Royal Never Give Up with cohesive and patient teamfighting. As a result, some expected Group C to be a race between the two for the first, but they couldn’t have been more wrong so far.

DRX have been improving since their defeat against Rogue on the second day of the main event. Their stand-out players have been mid laner Zeka and returning jungler Pyosik, with the latter being subbed out in the game against Rogue. The mid-jungle synergy of the players works well around the map and allows DRX to take control quickly, as seen in their wins over TES and GAM Esports. Nevertheless, if you shut the duo down early, DRX seem to have little other win conditions on the board.

TES, on the other hand, have been faltering in almost every aspect so far. ADC JackeyLove and support Mark are easily caught off guard by enemies. Top laner Wayward seems to offer little input into the post-laning phase because he’s often shut down in the early game himself. And jungler Tian hasn’t found his footing yet and hasn’t been able to execute ganks and focus on objectives. The only exception is mid laner knight, who has been their best player so far, boasting the fifth-highest KDA ratio in the main event with 13.0, according to Oracle’s Elixir. Still, he won’t be able to carry TES into the knockout stage alone.

Both sides have tons of kinks to iron out before they return to the Worlds 2022 stage at Hulu Theatre in New York. So far, it looks like they’ll be fighting each other for second place, even though they have what it takes to take down Rogue if they correct the mistakes from the past weekend.

A return to the international stage spoiled by superior opponents

GAM Esports fans and Vietnamese players must have been thrilled to finally end a two-and-a-half-year hiatus of not attending events. Still, not being a part of the international League circuit has taken its toll, and GAM have been simply outclassed on almost every step in Group C.

In their sub-25-minutes losses to DRX and TES, the Vietnamese side looked helpless and massively outclassed in macro. The case looked similar against Rogue, where the game took much longer, though Rogue were pulling the strings in that matchup. All in all, GAM have shown they have the spark they need to pull an upset in the group. But that’s only a glimmer of hope, and so far, they look like a free win from the perspective of all their opponents.

Rogue are the favorite to claim first place, but let’s not get over our heads

By the looks of it, Rogue are the best bet to finish Group C in first if they maintain their level of play and don’t crumble under pressure. The latter may be an easy mistake to make looking at Rogue’s risky yet confident playmaking.

If history has taught us anything, it is that we should never underestimate the LPL and LCK teams’ chances of pulling off a tough task. And, judging by the games so far, DRX and TES have what it takes to take the battle to the LEC champions and contest them in the group.

The action in Group C of Worlds 2022 returns on Saturday, Oct. 15, when the remaining matches are scheduled to play out.