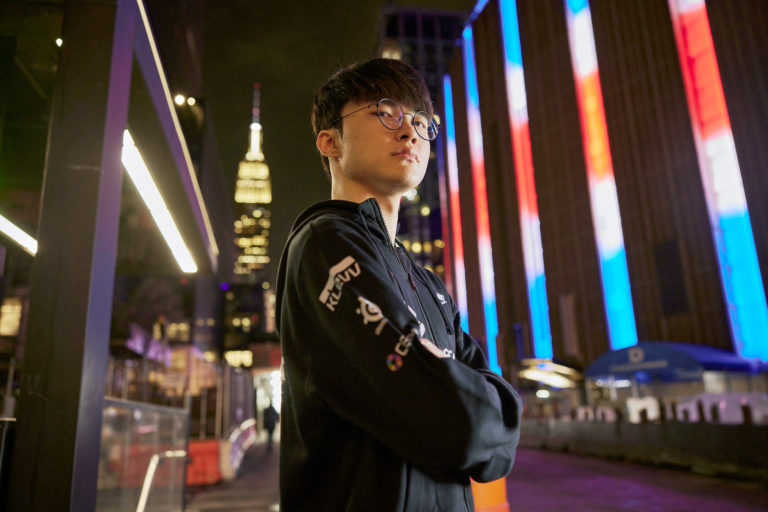 When the two most dominant regions in the history of professional League of Legends come head-to-head, they’re sure to put on a show. In their first bout at this year’s World Championship, the LCK’s T1 and LPL’s Edward Gaming sought to show one another why they continue to contest the title of best-in-the-world—complete with a roaring crowd echoing for both sides.

T1, rekindling the fire that afforded them one of the most dominant years in LCK history, stood firmly against the trials and tribulations of EDG, earning themselves a victory over the reigning world champions in only 22 minutes.

As soon as T1 got their first teamfight victory and secured an objective, they could not be stopped. The mobility of their champions allowed them to dance freely around their opponents, giving them the opportunity to scale at an exceptional rate.

A stage full of champions

On one side of the stage: the three-time world champions from the LCK, led by the best player in the history of professional League, Faker. On the other, the reigning world champions hailing from the LPL, hoping to grab hold of the Summoner’s Cup for the second year in a row. With so many accolades possessed between the two teams, they ensured that the crowds both home and away were in for a battle from the moment the draft phase began.

Some of the flashiest picks in League, known for dominant plays in the most capable hands—Akali, Lee Sin, Vi, Fiora—appeared in the lineups of the two teams. Yet most of the play-making these champions provide is locked behind their ultimate abilities, leaving the players piloting them to play a more methodical early game, one synonymous with the two regions.

But as soon as the ultimates were available, the fighting broke out. T1 emerged victorious in these early skirmishes as EDG focused heavily on Gumayusi, who was able to simply Spell Shield away enemy fire as Sivir. As EDG continued to focus their pressure into the T1 bot lane to little avail, Faker found the room to do what he does best, dominating his lane, then moving that pressure into team fights.

T1 could not be stopped as objectives continued to fall into their hands. Trying to escape proved useless for the members of EDG as their opponents were more than willing to expend their summoner spells to catch them. Though EDG found their opening at the Baron, T1 were more than happy to answer them, accompanied by a BM Teleport from Faker as he was being attacked.

Across the entire team, T1 accumulated 18 kills, funneled almost entirely into the hands of their carries, Faker and Gumayusi. It was the second-fastest game of Worlds so far this year, and likely one of many more dominant performances from T1.

The LCK is on the board

As the only LCK representatives to have performed on stage today, T1 emerged from this game with the region’s first win in the group stage. In doing so, T1 placed themselves on top of group A in a tie with the LEC’s Fnatic, who won their opening game against the LCS’ Cloud9.

In previous years, the LCK has proved to fans that the World Championship is their comfort zone. Just last year, all four of the LCK representatives advanced to the top ten of the international tournament, securing the second-through-sixth spots only behind EDG, who T1 successfully bested today.

Despite their loss, EDG have firmly established themselves as one of the most powerful forces in group A’s “group of death,” as many fans expected them to be. They will have the opportunity to secure their first win tomorrow against C9, while T1 will look to further separate themselves from the rest of the group against the Fnatic.

A rematch years in the making: DWG KIA reignite rivalry with G2 with lopsided victory at Worlds 2022