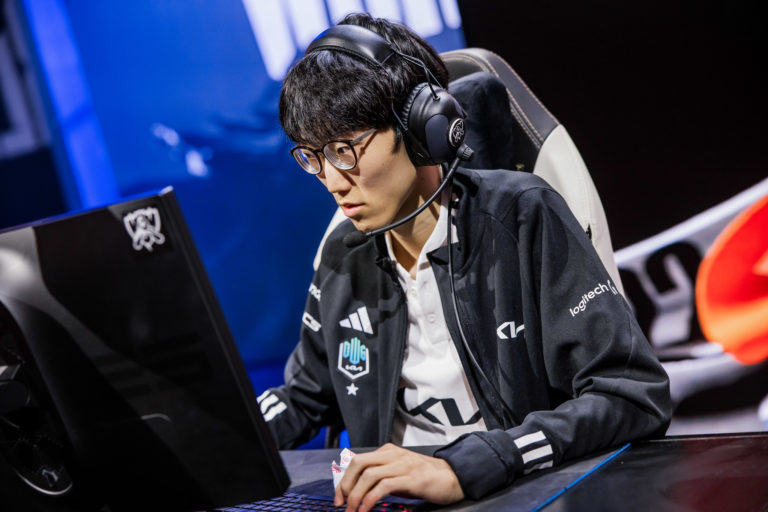 DWG KIA may have been the last team in Group B to take the stage at the League of Legends World Championship today, but it didn’t take long for them to advance out of the group, as they won their first game of the day against G2 Esports to secure their spot in the quarterfinals.

Earlier in the day, JD Gaming also clinched their spot in the quarterfinals, meaning that G2 (and by proxy, Evil Geniuses) have been eliminated from knockout stage contention at Worlds.

It didn’t take long for DWG KIA to get an advantage, as they continuously pressed their advantage by taking turrets and neutral objectives after securing pick after pick across the map. Multiple early-game skirmishes went in favor of DWG KIA, largely because of the presence of top laner Nuguri, who turned seemingly every fight in DAMWON’s favor through his play on Sejuani. In total, Nuguri finished the game with a scoreline of 3/1/5.

For DWG KIA, there may have been no better team to punch their ticket to the quarterfinals against than G2 Esports. After losing to G2 in the quarterfinals of Worlds 2019, the two teams have developed a top-tier rivalry over the last three years. This week, DWG KIA regained the lead in their all-time head-to-head by a score of six games to four.

DWG KIA will play two more games today against EG and JDG. If they win both games, they will force a tiebreaker for first place with JDG at the day’s close.

For G2 and EG—who both currently post records of 1-4—the road to the Summoner’s Cup ends here. In a similar fashion to yesterday’s Group A games, two Asian teams will advance from Group B, leaving the West to play spoiler at the end of the day.

The Worlds quarterfinal matchups will be drawn on Sunday, Oct. 16, immediately following the conclusion of the group stage.

‘I highly doubt that these 5 players will play in the same team again’: Razork talks Fnatic future