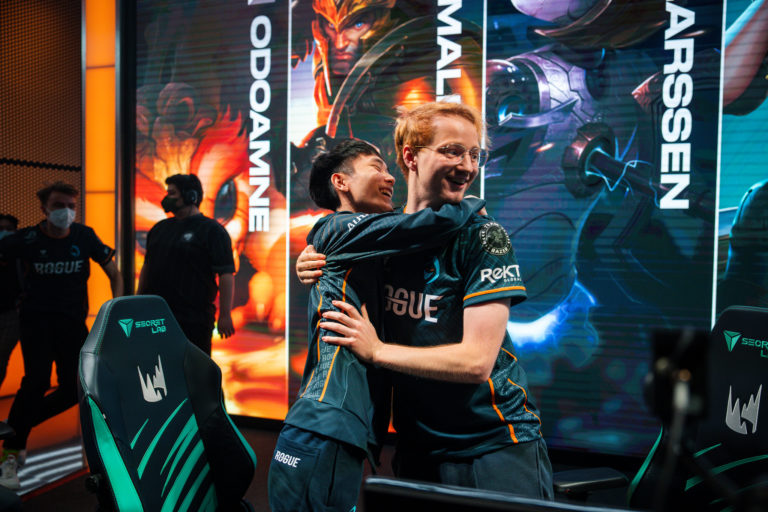 Spanish esports franchise KOI is coming to the LEC in 2023 following an organizational merger with Rogue earlier this year. And KOI is set to bring a strong majority of Rogue’s 2022 League of Legends lineup with it into next season. KOI today revealed the full host of starting players that will take the LEC stage starting next month.

Going into 2023, KOI will retain four of the five Rogue starters who competed for the organization this season, with only top laner Odoamne departing. The rest of the team’s starting lineup, which includes jungler Malrang, mid laner Larssen, AD carry Comp, and support Trymbi, will remain with the organization as it shifts hands.

Replacing Odoamne in the top lane will be former Vitality top laner Szygenda, who played entirely at the LFL level in 2022 and has not played on the LEC stage since 2021. Odoamne, who was an LEC All-Pro in all four of his splits in which he played with Rogue, will play for Excel Esports next season.

Related: Not just League: KOI will take over Rogue’s teams in Siege, CoD, and Rocket League too

Rogue was easily the most successful European League team in the back half of last season on both the domestic and international stages. Keeping the strong majority of a roster that won the LEC and made it the furthest out of any Western team at the World Championship together should bode well for the future of the KOI brand in League esports.

KOI’s 2023 LEC lineup was introduced today at a preseason event by the organization’s co-owner, streamer Ibai Llanos. Following their introductions, KOI took on LEC rivals Fnatic in a for-fun showmatch.

The 2023 LEC season will begin on Saturday, Jan. 21 with the first Winter Split. KOI will play its first game of the regular season that day against Team BDS.

The most exciting LCS players to watch in 2023

The Top 5 Strongest Low ELO Champions in League of Legends