Home League of Legends Blog Looking Back at DRX’s Run: The Worlds 2022 Champions! 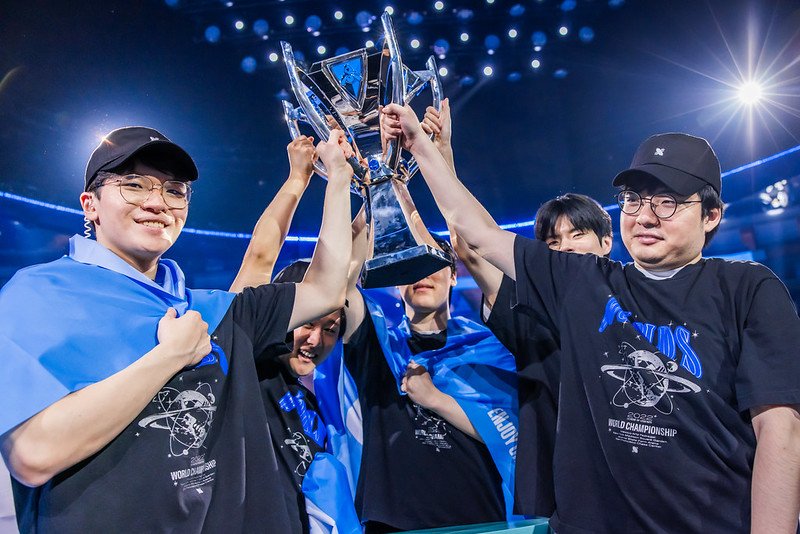 DRX has defied all odds as they recently claim the title of Worlds 2022 Champions after winning their series against 3-time world champions- T1 (formerly SKT T1). The team had one of the most impressive runs in the history of LoL Esports and it’s worth taking a look at once again how the least likely LCK team managed to upset both the LCK and the LPL into proving that they are the best team of the 2022 season.

DRX: Underdogs Until the End!

DRX was the team that nobody expected to win and yet every game they played proved doubters wrong. They placed 6th in the LCK during the summer regular season and only barely qualified for Worlds through the regional finals as the 4th seed. Coming into Worlds, the team would qualify to the main stage through the Play-ins in which some people even doubted if they can make it out after being grouped with MSI Champions – RNG – and the chance of playing against Fnatic for the slot.

The team managed to defeat RNG, which was a huge upset at the time, and eventually finished the Play-ins 6-0. The Group Stage was an even tougher beast since everyone expected they’d fall out flat since they were grouped with Rogue, the LEC 1st seed, and TOP Esports, who were one of the top teams in the tournament. They defied everyone’s expectation again by beating the competition and ending up 1st in their group.

While these achievements were impressive, Bo1s were not something that could convince the majority. Especially since the fans would attribute most of their achievements to their opponents “underperforming.” DRX would play against defending world champions – EDward Gaming – in the quarterfinals in a Bo5, where luck would not be enough to claim victory. The Worlds 2022 Champions would prove that it wasn’t merely luck that they beat both RNG and TOP as they convincingly beat EDG 3-2.

In the semifinals, DRX would once again be the underdogs as they would face against their own region’s 1st seed – Gen.G – and the favorites to win the world championships. Again, they would defy all expectations and beat Gen.G 3-1. The final challenge would be T1 who are looking invincible and are expected to claim their 4th title. As everyone counted them out, DRX once again claimed victory and became the Worlds 2022 Champions.

The Most Impressive Run in Worlds History

Overall, DRX played 25 games across all the Worlds 2022 stages with a record of 18-7. DRX also didn’t have the most impressive lineup of superstar players aside from seasoned veteran, Deft, and former world champion support, BeryL. The team managed to overcome all of the star-studded rosters across the world with players who didn’t exactly shine before the tournament before they eventually became the first team to successfully complete their miracle run in an international tournament.

Kingen was selected to be the finals MVP after an impressive series where he became the biggest problem that T1 had to deal with throughout the series. Whether he played tanks or carries, he lead the charge for his team to do what they wanted since his impact on the map left T1 little choice but to pay attention to him or he would run away with an insurmountable lead. Unfortunately, he secured leads whether or not T1 attempted to prevent him or not.

The last time a Top Laner won Finals MVP at the Worlds 2022 Championship, it was in 2015 with SKT MaRin. The role has been one of the least impactful roles for a long time in previous years but it has finally made a resurgence as the role provides so many useful utilities and the chance to carry the team. As a fan, we’re glad that Kingen got his well-deserved MVP. His team also made great contributions and definitely played important roles in helping the team win.

One narrative that was set in the Worlds 2022 tournament is that it was Deft’s last tournament before he retires. While the rumor of his retirement hasn’t exactly been confirmed, many people consider this tournament to be the most important one he’ll play since it might be the last chance he can win the Worlds Trophy. Sure enough, he managed to check out that item on his bucket list with his career being more than complete if he ever decides to retire.

Mandatory military service is an inevitable part of South Koreans and even legendary players like Faker and Deft are not immune to it. This will force players to retire early. However, it might be hard for any player to retire next year because it is the year that the 2023 Asian Games will be held. It is a significant tournament because any athlete or competitor that wins a Gold Medal in the Asian Games or Olympics will be exempt from military service.

Year of the LCK

Even though the LPL was hyped to be the best region in the world with their supposed only competition being T1 and Gen.G, The LCK had an impressive run in the tournament with their losses only being against teams from their own region. It still can’t be called the Year of the LCK as Royal Never Give Up won the Mid-Season Invitation but even LPL fans can’t dispute the the LCK is the strongest region at Worlds.

Asian dominance continues once again this year with the top performing regions being the LCK and LPL. However, the LCK has been steadily rising in the international scene which hints that the Korean Dynasty might make a return. Regions like the LEC and LCS need to step up as their performances have only been getting worse. In 2022, the LCK is the king and will definitely come back stronger next year.

Riot is unbenching the Kench in League’s 2023 preseason