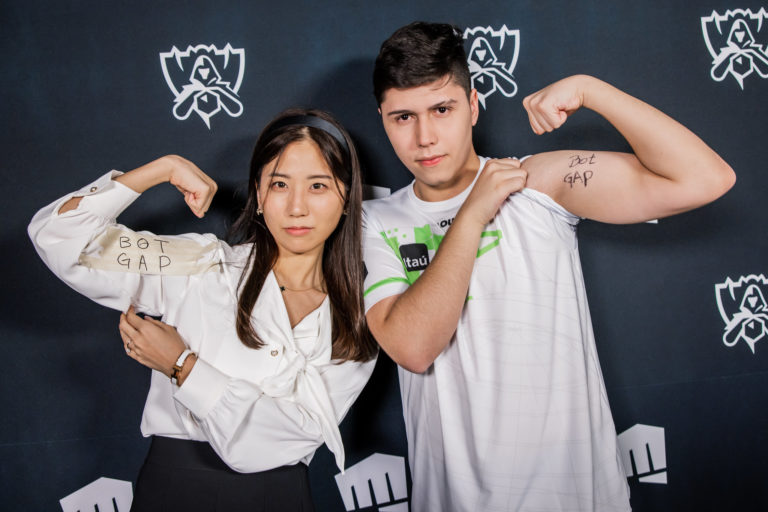 The third day of the 2022 League of Legends World Championship has come and gone, but there are still plenty of exciting stories that are starting to heat up as we head into the final day of groups in the tournament’s play-in stage.

From a surprisingly dominant upset victory, fan-favorite champions making an appearance, and the first farewell of the event, fans had plenty to cheer for as some of the best players in the world took the stage and stepped onto the Summoner’s Rift. There’s still a lot of League left to watch, but buckle up and get ready for even more action tomorrow when multiple teams will fight for their right to stay in the tournament.

Here are the top storylines to keep track of through day three of Worlds 2022.

League fans were treated to a couple of surprise picks in two games today when Isurus Gaming brought out Teemo in their match against LPL giants Royal Never Give Up, while DetonatioN FocusMe’s top laner Evi pranced into the match with Lillia.

Although Teemo got a ton of cheers from the crowd in champion select, the arena was relatively quiet for most of the match after RNG began its unrelenting assault on their hopeless opponents. Isurus’ top laner ADD tried his best to pressure Breathe’s Aatrox, but the World Ender paid no attention to the poor yordle as he found a couple of easy solo kills on the way to an easy victory.

Related: Who needs the meta? DFM earn another win at Worlds 2022 with unorthodox champions

On the other hand, DFM hopped, skipped, and bounded their way to a huge victory against Beyond Gaming, thanks to an unorthodox playstyle spearheaded by Evi’s tank Lillia. With her speed and durability, the talented top laner managed to lead BYG on a wild deer hunt, before luring them right into the waiting arms of his teammates. It was a perfect pick that keeps the LJL’s hopes alive at the event.

It isn’t goodbye, it’s a “see you later”

After dropping four games in a row, the LCO’s Chiefs Esports Club are officially eliminated from the play-in stage’s knockout stage and will be going home after their final game of the week. It was a disappointing finish for one of the region’s most hyped rosters, especially after they finished with a perfect regular season before winning the playoffs with only one loss under their belt all split.

Highlighted by veteran players like the team’s mid laner Tally and AD carry Raes, many people expected the Chiefs to perform relatively well due to their recent performances on top of the amount of international experience that this team boasts across the roster. A perfect split is also very difficult to come by, but they were never able to get their ship off the shores when it mattered most.

The TCL’s İstanbul Wildcats and the LLA’s Isurus Gaming both also failed to record a single win during the play-ins, effectively eliminating them from the tournament as well. Although it is sad to see them head home after only a handful of days, these three teams were never major challengers for the crown. Hopefully, their regions will be able to bounce back and return stronger next year.

You can never count out the underdogs at any League event, and the CBLOL champions made sure to put themselves on the map by taking down a red-hot Fnatic squad. LOUD showed confidence and class against one of the better teams in the play-in stage, as they found a handful of early picks that set them up for a teamfighting master class in the mid-to-late game.

The standout for LOUD this time came from the bottom lane with their 18-year-old marksman wunderkid Brance, who quite literally flexed on Fnatic on-stage and in the game with a dominant scoreline of eight kills, seven assists, and only a single death. Robo was also a tower diving menace, as LOUD lost all semblance of fear when jumping into a fight near the end of the match.

These Brazilian superstars are here to stay and are not scared of any opposition. Keep your eyes peeled for more highlight plays from this electric squad when they take on the LCO’s Chiefs Esports Club for their final match of the play-in group stage.

The final day of play-ins will take place tomorrow at 3pm CT, starting with a battle between Fnatic and Beyond Gaming.

Armed and ready: Isurus prepare Teemo for their Worlds 2022 match against RNG

A brief history of Teemo at the League World Championship