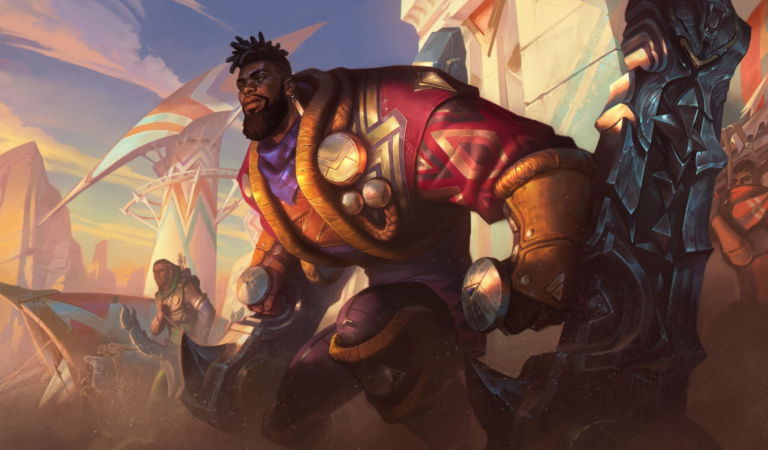 K’Sante, the Pride of Nazumah, is now available to play on League of Legends’ servers. K’Sante is the 162nd champion to be released in League and the fifth of 2022.

K’Sante is a frontline-focused, bruiser champion that is mainly meant to be played in the top lane. As a fighter with the potential to be a damage-soaking tank, K’Sante is an intimidating and versatile pick in any team composition. His ultimate ability, All Out, makes for a strong displacement tool that teams looking for a bit of extra engagement power should most definitely take advantage of.

K’Sante hails from the Runeterran nation of Shurima. Specifically, he is from a previously unexplored city called Nazumah, and as an esteemed monster hunter, K’Sante is the most well-regarded defender of the city. K’Sante is the first Shuriman champion to be released since Akshan in 2021 and is only the second new champion from the region in the last five years.

A key component of K’Sante’s lore is the fact that he is the first Black and openly gay champion to be released in League. Riot’s diversity and inclusion team went to great lengths to ensure the champion represented the “lived experiences” of real, marginalized groups, and K’Sante could resonate with people who don’t often see themselves represented in League champions.

As is tradition for new League champions, K’Sante has launched with one skin, Empyrean K’Sante. A prestige version of the skin, which was designed by rapper and pop star Lil Nas X, is also available to earn.

K’Sante is now available to play on the live League servers.