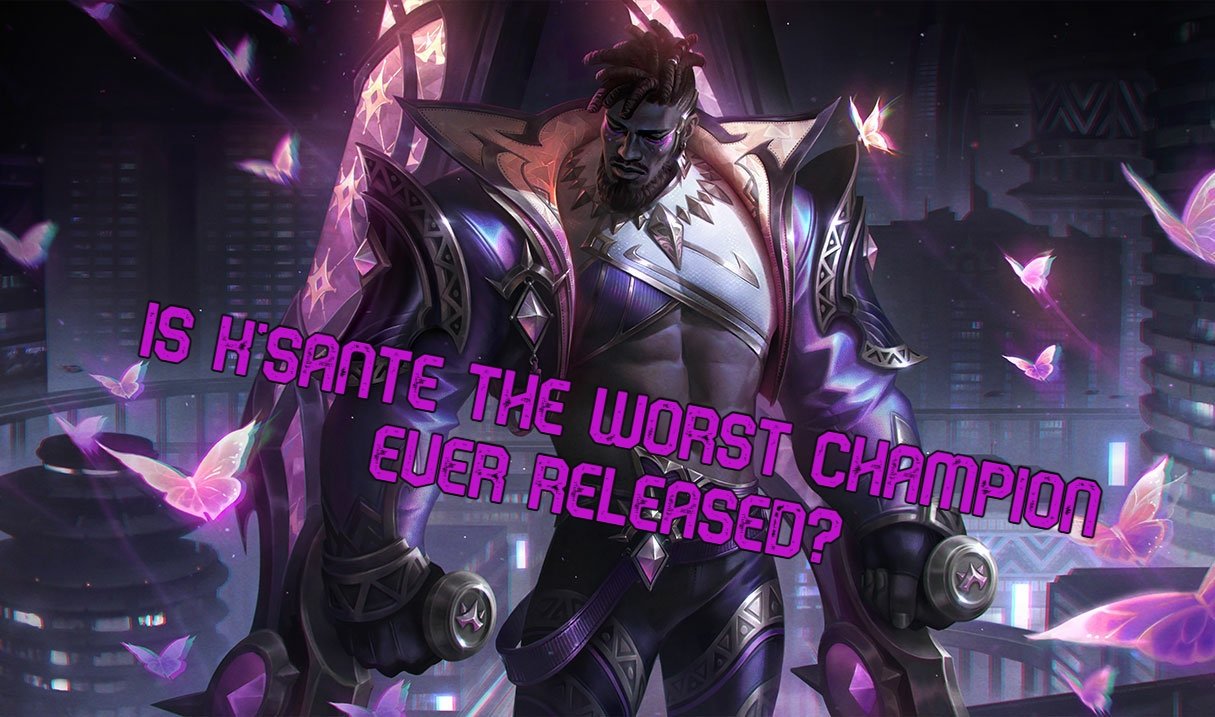 League of Legends has recently release K’sante, the Pride of Nazumah. Many fans have been excited about his release but his arrival to Summoner’s Rift has been nothing short of disappointing as he has been extremely weak throughout the early days with his win rate being the worst the game has ever seen. Let’s take a look at why recent champions have been increasingly underwhelming with every release.

K’sante is the latest champion released in Patch 12.21 whose design was intended to be a transformer champ that switches between a bulky tank into a heavy-damage bruiser. However, this entire design has its merits but the application in the game has become such a huge failure that it’s extremely hard for anyone to make a relevant impact using this champion. We foresee that the champion will receive some much-needed changes but the conversation needs to be had on how this incident happened.

The Pride of Nazumah is an absolutely underwhelming champion that has disappointed fans who were looking forward to his release. There are a lot of players who defend that he’s not as bad as people claim to be but the numbers simply don’t lie. He’s underperforming in every ELO and even though the argument that people need to take more time to learn how to use him, there are many champions before him that were more complicated to use but performed better in the games.

A Tank with No Bulkiness, A Bruise with no Damage!

K’sante was intended to be a full tank that transforms into a high-damage bruiser. Unfortunately, he is the worst version of both classes that doesn’t really impact the game in any way regardless of the form that he uses. As a tank, K’sante doesn’t have any hard CC nor does he have any abilities that can disrupt the enemy while he soaks the damage from the enemy team. He’s also unusually squishy despite building full tank.

As a bruiser, The Pride of Nazumah doesn’t provide a relevant amount of damage. His abilities definitely receive a buff in damage output, but not enough for him to burst down an enemy champion. The worst part about it is that he loses all his survivability and becomes extremely easy to take down. This problem is due to the tradeoff that he makes when activating his ultimate to go All Out.

The All Out mechanic is undertuned and Riot Games messed up with the ratio of defense to offense trade when using his ultimate. When K’sante uses his All Out ability, he sacrifices 65% of his magic resistance and loses 45% of his max HP so he only goes a little bit over half his max HP once he transforms. In return, he gets additional Attack Damage and Omnivamp, but the ratio is so small that it doesn’t really become meaningful enough to deal relevant damage.

The biggest problem is that he is a champion that needs to build full tank to make the ratio of his ultimate worth. Losing 65% of his resistances and being reduced to 55% of his original max HP is too much of a cost that it’s actually not worth using this ability during a teamfight. In fact, he has no ability that makes him useful in a teamfight.

How Did K’sante End Up This Way?

Riot Games has been significantly tuning down new champions coming out so that they don’t end up like other of the most broken champions upon release. Champions like Aphelios and Zoe wreaked havoc on the game for several patches straight because they were severely overtuned. It was difficult to adjust their stats just so that they don’t overrun the game. In the end, a lot of their core mechanics were changed just to finally make them balanced.

To prevent this from happening again, they are experimenting on making champions that have better stat and ability distributions before release. For the past champions including Nilah, Akshan, Bel’veth, Renata Glasc, Zeri, and Vex haven’t been extremely broken. While Zeri went wild for a bit, Riot Games took quick action to make her more balanced. Aside from her, the other champions have been relatively fun to play without being too much of a problem in the game.

Will The New Champions Simply Get Worse?

Riot Games will see the consistent decline in performance from champions they are newly releasing and will find a way to make new characters that are relevant to the game. It has always been the company’s mission to make every champion in the game have a significant play rate by making every unit playable and competitive. This is why we consistently receive changes every patch and reworks on older champion models.

K’sante will prove to be an example on how the new champions just feel bad to play. Although, the first week is always the hardest for every single champion that the game brings out because so many players want to use these “new toys” on their games. The spike in pick and ban rate makes it very hard to see if a champion is truly broken. In K’sante’s case, he’s simply too weak based on statistical evidence.

Is K’sante Weak or Do People Simply Not Know How to Use Him?

Many people have come in defense of Nazumah’s champion by stating that the champion simply has advanced mechanics that are hard to master during the first few times he’s played. This is why his win rate has fallen way below the acceptable 48% win rate line. However, having a win rate as low as 39% can’t be attributed to his difficulty alone as even the higher ELO players are having a difficult time making him work in their games.

If professional League of Legends players are performing horribly using this champion, it’s time to accept that it is flawed. Even though a lot of players can make him work, every champion should be accessible to a larger percentage of players that don’t make him such a bad character to play in the game. K’sante badly needs some buffs that will make him more relevant and we hope that we’ll see it soon.