Home League of Legends Blog Just catching up on LoL Worlds 2022? Here’s everything that’s happened in groups so far 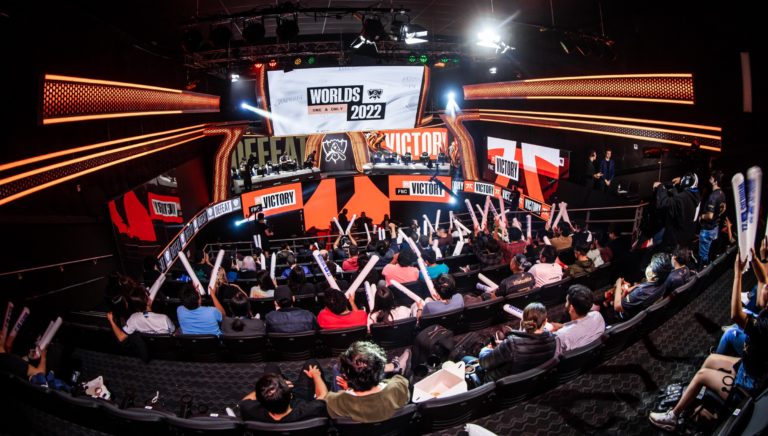 The first round robin of the 2022 League of Legends World Championship group stage is in the books. After four intensive days of League gameplay, teams have taken a two-day break to reset and make the best preparation for the upcoming matches, with only eight of the sixteen teams going forward.

In the second round robin, each group will play all their matches on the same day, meaning each team will play three games. Group A will start on Thursday, Oct. 13, and the other groups will follow alphabetically until Sunday.

For those who couldn’t keep up with all the action, here’s what happened in the first round robin of Worlds 2022.

Group A – Three-way fight for the top

Fans and enthusiasts expected Group A to be the “group of death” and it seems like they were right: EDward Gaming, T1, and Fnatic are all tied in first place with a 2-1 score in what is shaping up to be the most exciting group at Worlds. Only Cloud9 haven’t won a single match: their qualifying hopes are coming to an end.

Out of the three teams fighting for the top, FNC stood out the most. They had the chance of going 3-0 in the first round robin. Their loss against EDG, though, showed the EU team does have flaws and that handing free kills like in the EDG game might be fatal for their Worlds’ run.

T1 dominated both C9 and EDG and won the games in a convincing fashion, but their loss against FNC showed the team still has some weaknesses, one of which is their bot lane: when Gumayusi and Keria are not delivering, the whole team sinks. Fixing this issue will be T1’s main goal and it will be their key to a top-two finish in Group A.

EDG had a brutal awakening after losing to T1 in their group stage opener, but they quickly turned it around with two consecutive wins. The Chinese team is known for playing with composure and that might be an advantage when things will get even more heated in the second round robin.

Unfortunately for C9, they have looked miserable in the group stage. They seem to struggle against the other teams’ proactivity and aggressiveness, with an average of 16 deaths per game, according to Games of Legends. While there is still a chance to qualify, Cloud9 will have to win the next three games to even have a chance for a tiebreaker.

Group B – JDG leading the way

Group B haven’t had many surprises so far. JD Gaming finished the first round robin with three wins on the board, followed by the LCK’s DAMWON Kia, the LEC’s G2 Esports, and home heroes EG last.

The Chinese team is proving why they were the No. 1 team in the LPL, especially when it comes to late-game teamfights: JDG always know what they should be doing and they won’t hesitate to punish their opponents as soon as there is an opening.

DWG KIA showed some great potential so far, going even against JDG for the majority of the game and dominating G2 in their direct battle. The Korean team have a great early game, but their mid-to-late game transition isn’t nearly as good. Their 2-1 start should be good enough to be in the fight for second place, but the chances of fighting JDG for the top spot are going to be low.

G2 are currently sitting 1-2 in the group so far, but we saw some great potential. Aside from the whooping the EU team received from DWG KIA, the LEC team held their own against JDG. While it’s shaping up to be a tough second round robin, the game against the LPL first seed will be a great boost of confidence going forward.

As for Evil Geniuses, the team is struggling with the same problems C9 has. Their opponents are always one step ahead of them and the team haven’t been able to respond with such a high level of proactivity. With three losses already, their goal will be to avoid finishing 0-6 at the end of the group stage.

Group C is the group with the greatest number of upsets so far at Worlds. While many anticipated Rogue to fight for qualification, not many expected them to be leading Group C at the end of the first week.

What’s even better is that Rogue’s performance so far has been stellar. The entire team have been consistent and their games have never looked sloppy. If Rogue can keep this up, EU might finally have a team who can fight against the Eastern teams at Worlds.

DRX are currently second in Group C with a 2-1 score, continuing their run as a dark horse at Worlds. Despite losing to Rogue, the team were able to take down Top Esports and GAM Esports, thanks to a rediscovered Pyosik. If the Korean jungler can keep up his form, DRX will have a lethal weapon on their hands for the second round robin: the fight with TES is going to be intense.

Speaking of the LPL second seed, the team are heavily underperforming, with only won win on the scoreboard: players are making lots of individual mistakes and the team seems disjointed.

TES’s greatest weakness is they always want to look for teamfights or skirmishes, even when they don’t have the tools to do so: finding more composure will be the key to their recovery. If they can’t manage, we might see them failing to make it out of Group C.

As for GAM, the Vietnamese team haven’t matched the expectations that were set for them, currently sitting last with a 0-3 score. They aren’t able to keep up with the other teams and the general impression is that they are getting predicted and tricked consistently by others. It’s not going well for the VCS first seed, as they will likely leave Worlds after this group stage.

Royal Never Give Up have been a dominant force so far at Worlds, gapping everyone else in Group D, including the LCK first seed Gen.G.

The Chinese team looked flawless in the first week of the group stage, with both jungler Wei and ADC GALA also topping the KDA leaderboard. Knowing that they have already locked at least a tiebreaker for a spot in the knockout stage, the pressure will be on the rest of the group: RNG will only have to win one more game to qualify.

Gen.G have been following behind in second place, beating both CTBC Flying Oyster and 100 Thieves. That being said, the LCK powerhouse haven’t looked commanding enough, which raises questions about their chances of fighting for the title.

CFO is having a rather decent Worlds so far, having beaten 100T and lasted 40 minutes against Gen.G. While their chances of advancing are slim, ending third in the group will be a satisfying result for the organization that entered the PCS at the beginning of the season.

For 100T, instead, this group stage has been nothing but satisfactory. The team lost all three games and together with the other two NA teams, the region is currently 0-9. Aside from a decent laning phase, the rest of their gameplay has been a mess, with bad positioning and forced plays. Even though no one was expecting the LCS to win Worlds, this outcome is disappointing, to say the least.

There Is NO WAY This Item ACTUALLY Makes It To Season 13… Right??