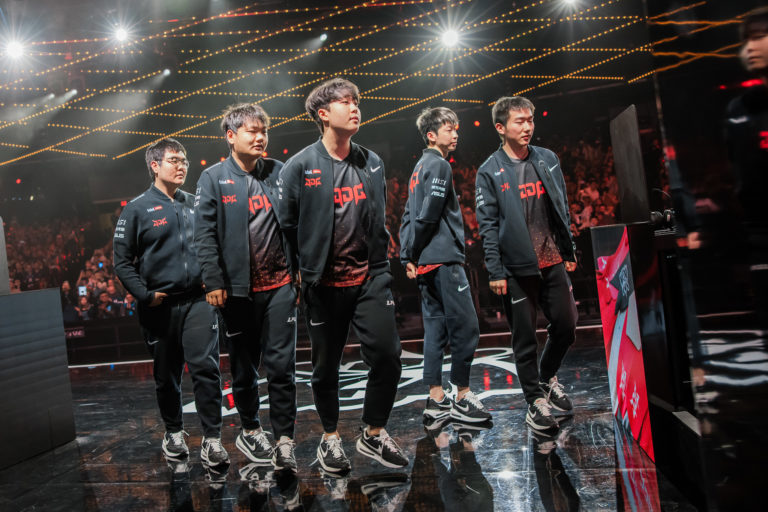 When JDG and DWG KIA first played last weekend, their match-up immediately earned the “instant classic” distinction. The 36-minute back-and-forth thriller in week one was one of, if not the, best games of Worlds thus far. So with their past pedigree in mind, it’s only reasonable that these two teams needed an extra tiebreaker game to settle who came out on top of Group B at Worlds.

After DWG KIA won the final scheduled game of the day to force the tiebreaker, JDG quickly followed up by winning the winner-take-all game to close out the group. DWG KIA’s perfect 4-0 day was denied and JDG was allowed to exhale, clinching first place in Group B despite the slip-up.

In their initial meeting on Oct. 8, it was JDG ADC Hope who put the team on his back, posting a dominant scoreline of 9/0/7 against DAMWON. Today, Hope didn’t get his first kill until the 24-minute mark of the first game, as DWG KIA kept him in check in order to ultimately force a tiebreaker.

In the tiebreaker game, though, Hope didn’t have to put JDG on his back, as top laner 369 shouldered the weight of his squad. With his team against the wall, 369 went 10/1/11 on Aatrox, the tournament’s most-contested pick, thrusting JDG into the quarterfinals on top of their group.

Had JDG won all six of their group stage games, they would have made history by becoming the first Chinese team to ever go undefeated in the Worlds group stage. No team from the LPL has ever had a perfect group stage run, but Royal Never Give Up currently sit with a record of 3-0 heading into the second round robin of this year’s tournament. They’ll have their chance to finish a perfect run when they play all three of their remaining games on Sunday, Oct. 16.

The quarterfinal draw will be revealed immediately following Sunday’s games.

‘I highly doubt that these 5 players will play in the same team again’: Razork talks Fnatic future