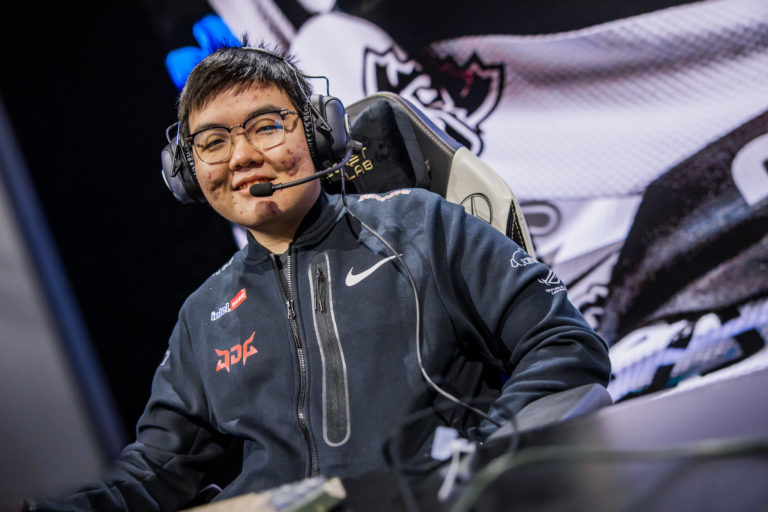 JD Gaming has become the first team to lock in their spot in the Worlds 2022 semifinals following their astounding 3-0 sweep over LEC first seed Rogue. These are the player ratings for all 10 players featured in the Rogue vs JD Gaming quarterfinals match-up at Madison Square Garden.

All stats were provided by esportbet.io.

Worlds 2022 continues to be 369’s statement tournament, and in the quarterfinals, he again turned tank duty into a masterful carry performance to lead JDG into the top four. On his final game on Ornn, 369 dealt 25k damage and led his entire team in this statistic. This was consistent throughout the entire series; Rogue was unable to deal with how tanky and powerful 369 was in late-game team fights. It was a perfect series from JDG’s star top laner as he looks to showcase a similar performance in the Worlds 2022 semifinals.

Today’s quarterfinals matchup was a difference between top-jungle duos. The star of it all was long-time JDG jungler Kanavi, whose pathing throughout all three games was a near masterclass on how to play chess as a jungler. Against Malrang, who was gank-oriented, Kanavi was able to cement an early gold lead over his opposite jungler simply through efficient pathing. That led to him being able to play through 369 as the duo carried all three games.

It was a fine series from Yagao, who only died once in each of the three games. He was not the star of the series nor was he a possible avenue for Rogue to come back into any of the three games. He did his role very well and provided supplementary damage in the late-game team fights for 369 and Kanavi to carry the games. That more than makes up for his poor early-game laning phases against his mid lane opponent, Larssen.

It was a weak performance for JD Gaming’s AD carry throughout the three-game series. While he had a strong game two on Aphelios, he was the subject of many picks from Rogue. If not for JDG’s strong team-fighting, these picks could have spelled doom for JDG. Still, even though he was picked off a lot, his 24k damage in game three on Lucian lifted his series overall.

It was a solid performance from Missing who prevented Rogue from making any major picks onto JDG’s major damage threats. He was able to evade being picked off himself in the major team fights and was a positive factor in stopping aggressive pushes from Rogue. The one caveat to his gameplay would be his final game, where he was unable to keep Hope safe. Other than that, Missing was a reliable piece for JD Gaming.

It was a rough series for Odoamne, who was put on tank duty in all three games: once on Renekton and twice on Maokai. While he was able to showcase a strong early game laning phase on Renekton, that lead did not amount to much as 369 was able to carry the later portions of the game despite his cs lead. His final two games on Maokai were where things took a turn for the worse. While his damage numbers in the final game were a respectable 14k, third most on his team, he was the punching bag for many of 369’s impressive outplays.

If Rogue were to win a single game, it would have needed to come from a strong early performance from Malrang. To his credit, Malrang was very proactive throughout all three maps, which helped keep the games from snowballing early. But, Malrang was a non-factor in late-game team fights and was unable to replicate his team fight performances from groups. He was completely outclassed by Kanavi and often found himself down CS in all three maps.

While Rogue did not win a single game, Larssen was a win condition for Rogue in all three maps. He was a consistent presence in all three games. Throughout the series, Larssen went 8/2/4, where his only two deaths come from his first game on Azir. It was a tall ask for Larssen to carry the later stages of the game because of how far behind they were. Still, he was able to give Rogue hope on LeBlanc in game three as he completely shut down Hope’s Lucian.

Unfortunately, Comp just wasn’t as present in the late-game team fights to deal any meaningful damage. While most would have resulted in a loss, dealing less damage than your tank top laner in two out of the three games is simply not good enough. Still, he was solid throughout the laning phase and early game portions of the game.

Trymbi was a primary reason behind Comp’s strong early-game presence for Rogue and his proactivity throughout the map deserves some praise. But, a lot of these plays did not result in many leads and were instead simply paths to grey screens for the Rogue support. Throughout the series, Trymbi was subject to engagements from the side of JDG and he was a non-factor in the late-game across the three games.