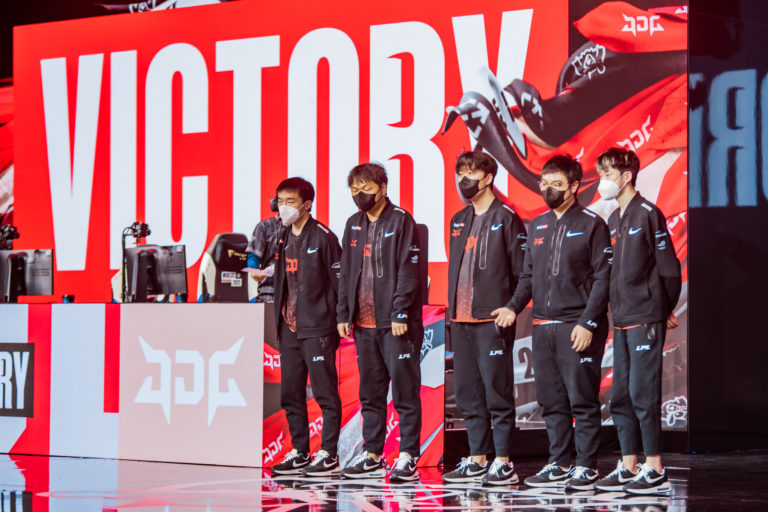 JDG Intel Esports Club is the first team to reach the 2022 League of Legends World Championship semifinal after having demolished the last European team in the competition. With a clean 3-0, JDG eliminated Rogue and cemented their position as favorites for the Worlds champions’ title.

The LPL representatives dominated the series, establishing their reign over the Rift in the early game and rarely giving Rogue opportunities to strike back.

Despite the first kill of the series going to Rogue, the LPL first seed was in control of the first game from the start. Pivotal to JDG’s success was the early game success created by their jungler Kanavi. His Graves dominated the Rift with precise ganks and rotations, taking away from Malrang many opportunities to assist Rogue’s laners. But even with JDG ahead in the early game, Rogue kept their composure and shut down their opponents various times, directing all their advantages to the Lucian-Nami duo in the bot lane.

In the end, similarly to other games played during the tournament, one fight decided the fate of the game. In the most extensive teamfight of the game, both teams showed their skills and their faults. But the scales were on JDG’s side in the end as Rogue had over chased too much, such that the opponents who fell at the break of the fight had time to come back to life and join their teammates to deliver the coup de grace to the LEC champions.

From then on even if Rogue found some opportunities to shut down their opponents, JDG had the game in their hands and swiftly ended it after decimating the ranks of their enemies and taking the baron buff.

The second game of the series cemented JDG’s reign over Rogue. Differing from the previous map, the LPL representatives focused on enabling their bot lane duo from the start, with a very early gank from Knavi that gifted Hope the first few kills. In response to JDG’s aggressive play, Rogue tried to force an engage on their opponents but they couldn’t capitalize on their investment of summoner spells.

The bot lane dominance from the LPL first seed kept increasing their gold lead while Rogue struggled to commit to their picks and engages.

At 20 minutes, JDG was 6,000 gold ahead of Rogue and made a move to obtain the first Baron of the game, but they struggled to maximize its power. Soon after, however, they claimed a second Baron without contest and razed their opponents’ base.

The most exciting game was the last, a meeting Rogue actually contested for most of the map.

The LEC team went all out when cornered and found a successful early game by enabling their bot lane duo in the first few minutes. Rogue’s map control allowed them to trace Kanavi’s movements on the map and anticipate his ganks with ease.

But, despite that, JDG solo laners’ prowess surpassed Rogue’s team coordination, allowing their whole team to retake vision control over bot side river.

With a small but steady gold lead and several successful skirmishes, JDG consolidated their place in the game. Utilizing Ornn and Nami’s ultimates, JDG controlled the space on the map, but Larssen’s outstanding mechanical skills presented Rogue with the perfect opportunity to find the right teamfight and cement their advantages. JDG didn’t allow Rogue to rest on their laurels though and slowly regained control over the Rift thanks to exceptional team fighting skills.

In what was the last teamfight of the game and the whole series, JDG displayed all their individual and team abilities, erasing any doubt as to why they are considered title favorites.

The LPL first seed is the first team to qualify for the semifinals of the 2022 League World Championship, while European fans salute their last representative as Rogue gets eliminated from the competition.

With Rogue’s elimination, Western League is now out of Worlds.

The expectations for both LEC and LCS were probably too high for all seven teams to meet. As League fans felt excited looking at the teams’ outstanding regional performances, many hoped to see the same prowess on the international stage.

But, once again, LCK and LPL reigned unchallenged, with only one of their representatives falling short of quarterfinals while five out of six western teams were given the axe.

With Rogue eliminated, only teams from LPL and LCK remain and the first LPL seed now awaits who they will have to fight for a chance at the finals in San Francisco. They will not have to wait long⁠—T1 and RNG will be the next ones on-stage tomorrow.

Riot’s CRAZIEST Item Idea SO FAR… (Will This REALLY Be Added?)