Home League of Legends Blog Jankos speaks on why G2 is so good at beating Evil Geniuses, and if Group B is the ‘Group of Death’ at Worlds 2022 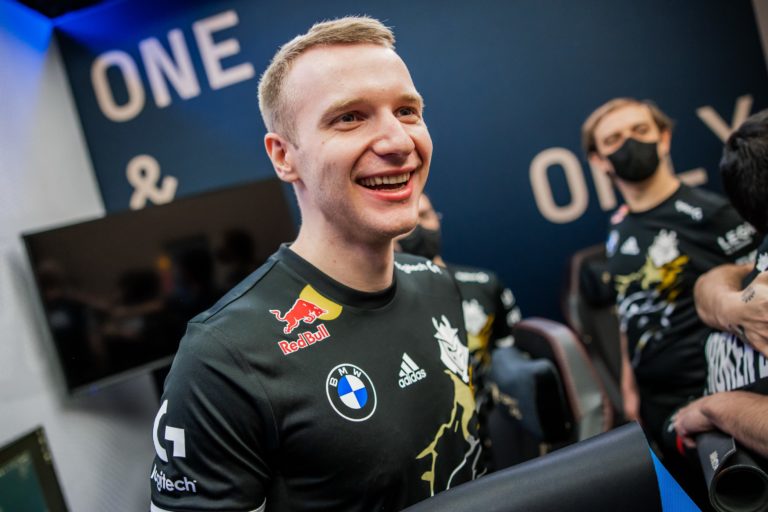 A professional League of Legends team rarely wins seven straight games against a single opponent—especially throughout a single season. One would expect the team on the short end of that streak to eventually adapt, perhaps change their strategy, or simply wait for the meta to fall in their favor.

For Evil Geniuses, none of the chips have fallen their way against G2 Esports this season. In seven meetings this year, G2 is undefeated against EG, and last night, the LEC representatives added another tally mark on the board by beating EG in a decisive 27-minute rout.

This weekend’s game was perhaps the most impressive of G2’s seven wins against EG this season. Not only was the 27-minute length the fastest of G2’s victories over EG, but the 11,000 gold differential made for the second-widest margin of victory in the season series.

G2 jungler Jankos spoke to Dot Esports following the decisive win and accredited the performance of his longtime teammate Caps as the deciding factor. “I feel like we have good solo lane matchups,” Jankos said. “Our mid [laners] are playing two different styles. One is more selfish, one is more selfless, and it’s clear to see who plays which one.”

And while Jankos may have a point about Caps’ strengths as a team player, he may be selling EG’s Jojopyun short. The EG mid laner ranked in the top half among all NA mids this summer in deaths while ranking second at the position in assists, according to League stats site Oracle’s Elixir. While Caps might play for the betterment of his teammates, his opponent in the rivalry often puts his own life on the line to set up a game-changing play for his teammates.

Against G2, though, those opportunities have been hard to come by for Jojopyun, and when they do arise, the rookie is usually punished swiftly. In games against the LEC spring champions, he holds a KDA of 1.4, two points lower than his season average, according to League stats site Games of Legends. For reference, Jankos has a KDA of 4.4 in games against EG this year, while Caps posts one of 5.8.

Jojopyun and the rest of EG still have at least one more shot at G2 this season. They’ll meet on Friday, Oct. 14, for potentially their last match of the year, barring any meetings in the Worlds bracket stage should they both make it out of Group B.

“We still have only won one game against them, so we have to keep our focus up, but if they play the same way they did against us today, I feel confident in the matchup,” Jankos said.

G2 and EG’s seven games this year sets a high watermark for other teams who make up the dynamic in the EU/NA rivalry in professional League. For two teams to meet frequently is rare, especially for two teams from regions that rarely play each other. EG and G2 have already faced off seven times this year, nearly as many as the rest of EU and NA combined over the last two seasons (nine).

“I think it would be very fun to have more best-of-fives between the two regions,” Jankos said. “But at the same time though, there’s no space because the season is so long. There’s MSI and Worlds, so I don’t really know how to fit in the schedule.”

Jankos suggested that Riot could have to introduce a “more loser-friendly” Worlds format or perhaps add more teams to the Mid-Season Invitational to get more potential matchups between EU and NA. Although Riot has said that it’s looking into adding double elimination at Worlds, no progress or updates have been shared over the last season.

For now, European and North American fans will have to get by with their regular dose of G2/EG games, which have come early and often this season. The only other scheduled matchup in the regional rivalry at the Worlds group stage comes in Group A between Cloud9 and Fnatic.

That group also features former Worlds winners in T1 and Edward Gaming, causing many League fans to pin it with the “group of death” label pre-tournament. But, after two days at the group stage, the focus is shifting to Group B as the potentially most-difficult group at the event. With G2 being on both ends of lopsided games, EG giving JD Gaming a run for their money, and DWG KIA taking the Chinese champs to the brink in the best game of the tournament so far, it’s been an easy pivot to hand that “group of death” marker over to Group B.

“The group is tough, but if you’re a good team, you’ll make it out,” Jankos said plainly. “If we’re not a good team, we’re not going to make it out. Would I prefer to be in Rogue’s group, or Fnatic’s group, or [Group D]? Yeah, possibly. But it doesn’t really matter. If we can be good, we can make it to best-of-fives.”

After splitting their first two games, only JDG remains on the docket for G2 before the second round robin. The LPL’s number one seed has emerged as a clear tournament favorite in its early stages, but that doesn’t scare Jankos. Getting a chance to skirt past the event’s toughest contenders in the group stage should “technically” set G2 up with a “not-as-strong opponent in the quarterfinals,” the G2 jungler said.

“For now, we focus on best-of-ones and we don’t think about the future too much, because our future might just be taking a flight to Europe next week,” Jankos said.

G2 will close out their first round robin of the group stage with a matchup against JD Gaming on Oct. 10. They’ll rematch against EG for potentially the final time this year on Oct. 14.

Riots BEST Change IN YEARS! PLEASE DO MORE CHANGES LIKE THIS!!