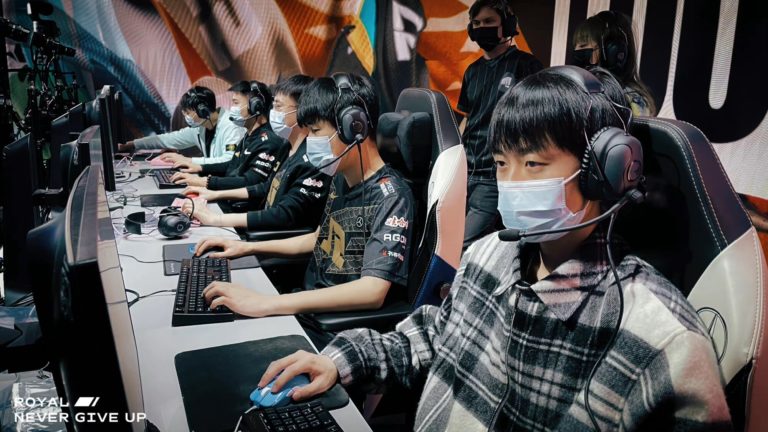 Now the play-in stage is over, the 2022 League of Legends World Championship action will continue with the group stage starting on Oct. 7. This phase will feature four different groups, with the top two moving on to the knockout bracket.

Fans already have an idea of how all the other groups stack up, and Group D will be the last one to round everything off. The home heroes 100 Thieves will be facing three Eastern teams this year: Royal Never Give Up (LPL fourth seed), Gen.G (LCK first seed), and CTBC Flying Oyster (PCS first seed).

While they don’t have to beat all of them, 100T will still have to perform better than two of them to advance. Does the team have the potential of fighting for a top-two finish? Here’s our preview of Worlds 2022 Group D.

The Korean first seed Gen.G are the favorites to get out of Group D. The LCK Summer Champions went 17-1 during the Summer Split and only lost one game in the Summer Playoffs.

Led by their two carries Ruler and Chovy, Gen.G has put together one of the most formidable rosters in recent history.

Peanut reached his best form ever, even better than when he was playing on SKT, with great proactivity and smart ganks; Doran has had steady improvements and despite being a weakside player, he averages positive gold and exp differential at 15 minutes, according to League stat sites Games of Legends; support Lehends is known for his wide champion pool, having played 13 different champions, including his iconic Singed, on Summoner’s Rift.

Gen.G’s main concern should be finding the best playstyle for the Worlds meta since bot lane might not be as impactful as it was before. As a result, the shift of power from the bot lane has caused the jungle and mid lane synergy to become even more crucial for success: Peanut and Chovy’s performances will be the key to Gen.G’s run.

Royal Never Give Up had to fight their way to the group stage after being seeded into play-ins. While it was expected to be an easy run, play-ins proved to be a lot more tricky.

The LPL’s fourth seed surprisingly lost their opening game against DRX, which essentially meant they would lose direct access to the group stage.

As a result, the Chinese team ended second in their group and were forced to play an additional series against the LJL’s DetonatioN FocusMe, who made the impressive feat of also taking one game from RNG when many expected it to be a clean sweep.

Now the team made it to the group stage, it will be crucial for them to fix the small issues encountered in play-ins, especially during drafts. RNG has picked a number of champions so far, but they have avoided playing top picks like Miss Fortune, Hecarim, and Maokai. Not having these power picks might be a great disadvantage for them in the long run.

In general, though, the team still has a lot of positives. Top laner Breathe racked up a total of seven solo kills during play-ins, acting as a key player in mid-game skirmishes for RNG’s victories. GALA and Xiaohu continue to impress as carries of the team. Both have dealt more than 26 percent of the team’s total damage output in play-ins, according to Games of Legends. Apart from a few mispositions by support Ming, RNG played solidly.

RNG is expected to make it in the top two, but the Chinese team will need to understand how close they are in terms of skill level to their groupmates and carefully navigate the matchups to make a solid run through Worlds.

CFO — the underdogs of Group D

Founded by CTBC Sports Entertainment, CTBC Flying Oyster are the first seed from the Pacific Championship Series, having won the 2022 Summer Split Playoffs.

After acquiring the PCS spot from Machi Esports at the beginning of the season, the team finished second behind PSG Talon in the region’s spring season. While it was expected to see them continue their streak of impeccable results into the summer, few expected them to win playoffs. What was even more impressive, though, was how they didn’t lose a single series; they dominated everyone in the upper bracket, including PSG Talon, and then swept BYG 3-0 in the finals.

Despite being a new org, the players on the roster are all veterans with many years of competitive experience. Most of them even have already competed at previous Worlds. ADCs Shunn and Atlen are the only exceptions; this will be the first international tournament of their career.

The 20-year-old Shunn will be the starting ADC for Worlds. During the Summer Split, he and Atlen split time on stage, but Shunn competed during playoffs. With CFO being his first competitive League experience, the Taiwanese player has already earned a golden chance to prove himself on the biggest stage of the season.

But the real shining point of the roster is their mid laner Mission. He has consistently dealt one-third of the team’s total damage output throughout summer thanks to his control mages. Viktor and Taliyah have been his most-used picks. Expect them to be present at Worlds as well. Together with him, top laner Rest also stood out this last split: mostly a weakside player, he makes his presence clear during the crucial teamfights, which are the team’s specialty.

CFO isn’t a highly proactive team in the early game. They prefer to play conservatively and wait for the carries to hit the right item spikes. Nonetheless, they are quite smart in punishing over-aggressive enemies and build their leads from there. Once it gets to the later stages, they rely on composure and the right openings to initiate fights.

The home heroes are going to be the main subjects at Worlds 2022. Based on how EG played against MAD, there are higher hopes for fans compared to previous years.

Despite losing to C9, 100T remained among the top two of the LCS for the majority of the season. It’s evident coach Reapered brought the Korean low-volatility philosophy to the team; 100T relies on strong macro play and focus on objective control as well as vision denial to find the best openings for teamfights.

100T has the traditional lineup with a weak side top laner, mid laner Abbeddagge and ADC FBI acting as the two primary carries, and jungler Closer being the playmaker for the team. The team has large champion pools and flexibility across all roles, which might come in handy in the second round-robin after teams have figured out how to draft against each other.

While the team might not be the top-performers of NA, 100T had the luck of making it to one of the least competitive groups at Worlds this year.

Aside from Gen.G who should be prevailing over everyone else, the second place will be a three-way fight between RNG, CFO and 100T. While RNG are expected to advance, they showed shaky performances in play-ins and it can be a chance for the LCS team to take a win off them.

Considering the fact RNG will have less time to prepare for the group stage, 100T (and CFO) might make the upset happen. The chances are there, but it will be up to the North American roster to grab the opportunity when it comes.

Isurus Seiya on representing the LLA at Worlds: ‘My dream is to bring a Latin American team to the group stage… I have to do it’