Home League of Legends Blog How They Got Here: JDG’s Journey to Worlds 2022 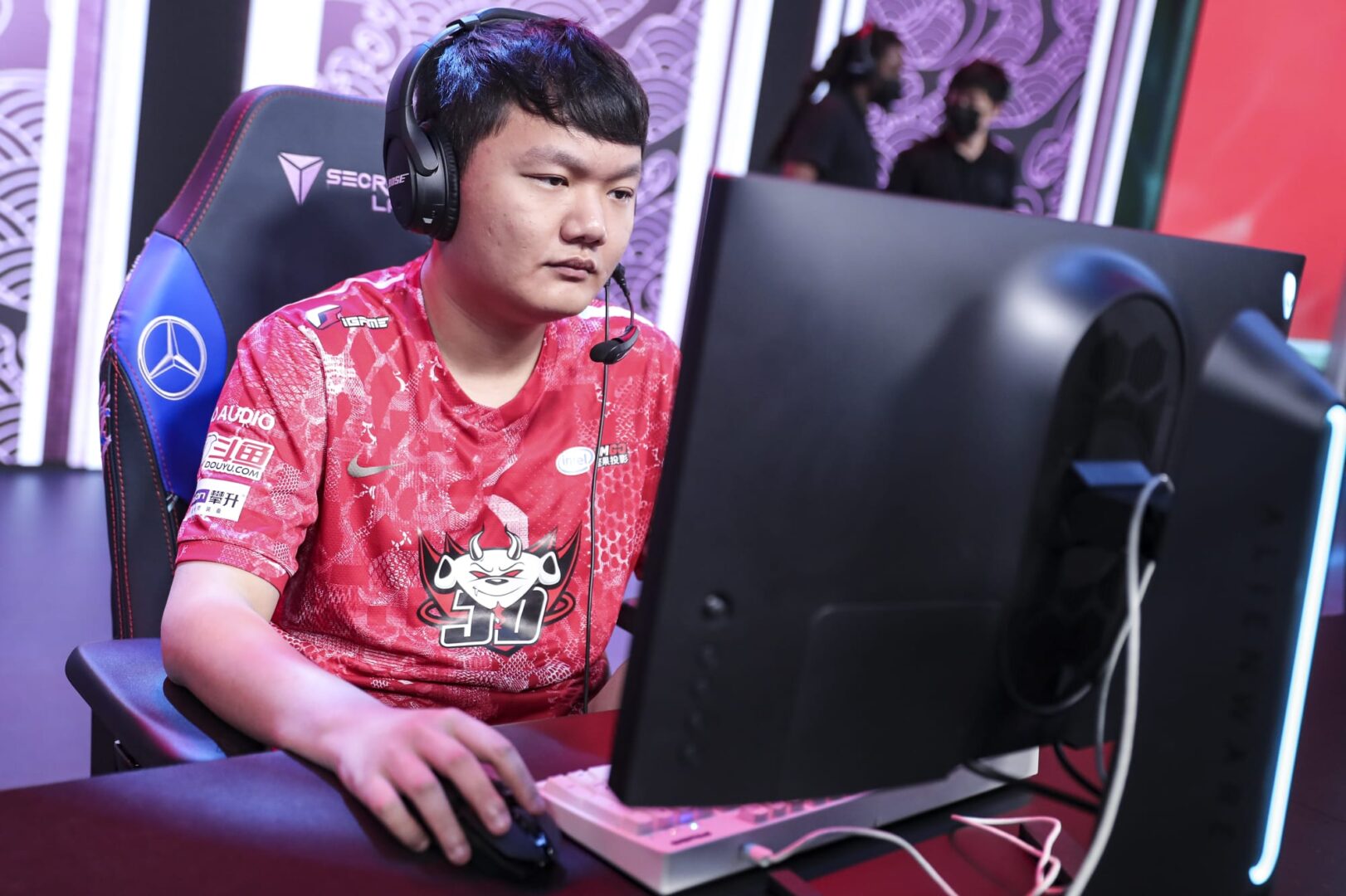 In 2019 369 had a strong coming-out party earning second-team all-pro in his first split in the LPL with a very feast-or-famine play style. When 369 is playing well he is one of the best top laners in the world. After a very weak summer 2021, he would be acquired by JDG for the 2022 season. He would struggle in the spring split but come summer he would have the strongest split of his career seeing him earn first-team all-pro with many dubbing him the best top laner in the world.

The downfall of Griffin came due to the mistreatment and improper handling of Kanavi a young up-and-coming player at the time. Maybe this motivated him but Kanavi has been one of the best junglers in the world since joining JDG full time winning an MVP in the spring split of 2020 along with three consecutive first-team all-pro awards starting that same year. He plays primarily carry junglers using strong laners to let him farm up and takeover games. 2022  has been no different seeing him earn another first-team all-pro in the spring and second-team all-pro in the summer. He has cemented himself as one of the best and doesn’t look like he’s slowing down anytime soon.

The longest-lasting member of JDG joined the team in December 2017 and has remained the midlaner ever since. He’s never truly shown to be one of the truly elite midlaners in his time but has had incredibly strong showings over the last five years. He truly shines on his pocket pick Zoe being deemed one of the best in the world. While not expected to carry he still has strong showings throughout the year and can be a difference-maker for the team.

Another new edition to the team this year after a long four years in the EDG system splitting time on both the main and academy rosters but never seeing consistent playing time. JDG saw more potential in him and looking to upgrade at ADC pulled the trigger on Hope. Hope has been great for the team staying steady in the bot lane and coming through whenever they need him to. The most lowkey member of the team Hope generally has below-average laning numbers allowing for his team to play around the carries.

The support for WE for a number of years would swap teams and see some of his best splits earning his first all-pro teams earning third team all-pro in spring and second team in summer. Missing has shown abilities to play all types of supports propelling his whole team to excel. Combing incredible support with an incredible jungler allows for them both to bring out the best in their team and has been a big reason for JDG’s success this year.

In the spring split, JDG would show off a lot of what was to be coming from their team. Kanavi was again a phenomenal jungler throughout the split. He would finish the split with 10 series MVPs second most for the split and be voted first-team all-pro for the LPL. A big problem came from 369’s lackluster performance which saw him struggle in many big-time matchups and lose his team the game.

His performance would pick up near the end of the split but was nothing incredible. The rest of the team remained very solid to strong and would help JDG finish third in the regular season. They would win their first game in the playoffs before falling in back-to-back games against RNG and V5.

Summer split JDG knew they had the talent to be something special and the player that vaulted them into the top tier would be none other than 369. He showed off all the potential he had shown in the past and proved that he is still a premier top laner. JDG would have strong performances from top to bottom and would finish the split in second place with a record of 14-2.

Kanavi was as good as ever with Yagao and the bot lane performing at a top-five level for their position for the whole split. 369 would be voted first-team all-pro for the LPL while Kanavi and Missing would both be voted 2nd team. This strong performance would not stop going into playoffs which saw them reverse sweep Top Esports in winners finals before besting Top again in Grand finals and earning the LPL’s first seed at Worlds.

Coming into Worlds JDG was seen as one of the favorites for the whole tournament and they have shown why so far. Kanavi and Hope have both been fantastic so far finishing with the fifth and sixth most kills of the group stages. 369 continues to show off finishing with strong laning numbers having the second-highest gold difference at 10 minutes for top laners and the second-highest damage per minute for all top laners.

Yagao has had weaker laning numbers but still has the second-highest DPM for the team and is top 20 in the whole tournament. JDG would only lose one game to Damwon gaming and would secure first in their group thanks to an outstanding performance by 369 in the tiebreaker.

Now JDG is set up to play what many are saying is the weakest team to advance being the LEC’s Rogue. JDG is one of the favorites to take the whole tournament and has shown top to bottom they are one of if not the best team in the world. Since the start of the summer split JDG has been on a mission and has shown no signs of slowing down now.

‘It was an honest mistake’: Riot admits the Worlds 2022 event pass is a worse deal than the previous editions