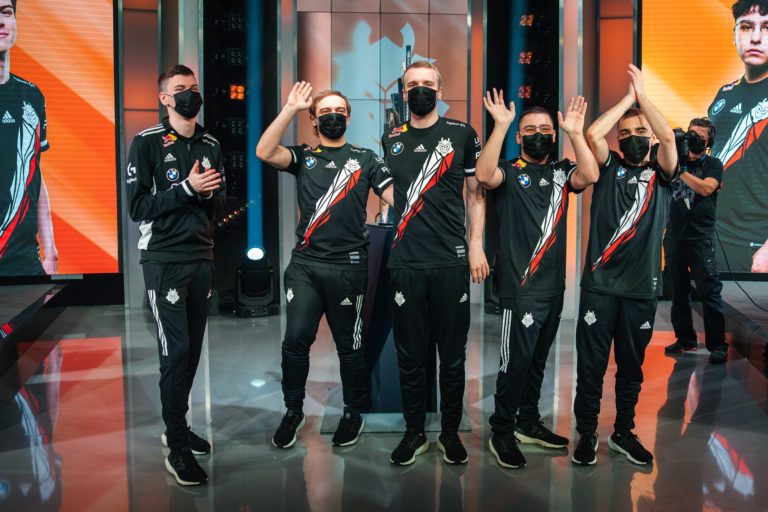 The Kings match of the LEC Summer Split saw G2 Esports demolishing Rogue with a sweep 3-0. Thanks to unconventional drafts, great pick flexibility, and pitch-perfect synergy, G2 take down Rogue and move to their eleventh LEC Grand Finals, looking for a chance to win their tenth crown.

The Samurais began their reign right from the start of the first game, obtaining first blood on the top side of the map. Rogue obtained a counter kill thanks to their quick response and swift movements across the map. Even though the early game sees both teams obtaining kills across the Rift, the scale is tilted towards G2’s side, who obtained the first herald and first drake. The game snowballed in G2’s favor because of these neutral objectives and small early advantages.

At 16 minutes into the game, G2 is 5k of gold ahead of Rogue, who struggles to find a way back into the game. G2 keeps widening the gap between them and their opponents by securing more neutral objectives despite Rogues’ attempt to stop them. With the Baron buff, G2 besieges Rogue’s base and annihilates them during their last defense attempt. Targamas was the key component of the first win. With his perfectly timed rotation, he was present at every teamfight, enabling his teammates to go all-in every time.

The second game showed the reason why G2 are so scary. The flexibility in their draft was what Rogue feared most, and G2 truly demonstrated to be able to play anything, even Varus AP in the mid lane. In an interview with eSportMag last week, Rogue’s ADC Comp said that he believes G2 to be the kind of team that can play “pretty much anything.” He then added that despite a team being ready to face G2, they will never be prepared enough: “if they want to play something random you’ll never find out until they pick it in the draft.” G2 coach Dylan Falco later explained that the Varus pick was something they have been working on since caPs “saw a YouTube video” on the champions being used in mid lane.

Despite the pick ultimately working out, the second game was the most fought of the series. Both teams drafted a scaling composition, leading to a slow-paced early-to-mid game with only 4 kills total on the board at 25 minutes into the game. But once again, the neutral objectives on the map were the center of the fights, with the two teams evolving their game strategy around the infernal soul contention. G2 ultimately won the fight, thus obtaining the dragon’s soul. However, Rogue cut through their opponents’ ranks, leaving G2 with no choice but to retreat after obtaining the buff.

This prompted Rogue to make a move for the Baron and to start besieging the G2 base once he obtained the buff. Rogue seemed to be on their way to victory, but one mistake cost them the game. Despite the baron buff having expired, Rogue committed to taking down their opponents’ top inhibitor, giving G2 the chance to engage them and take them down one by one. With only Odoamne left on the Rift, G2 teletransported near Rogue’s base and swiftly closed the game before any of their opponents could respawn.

G2 led the series 2-0 thanks to their dominance and moved to the third game with the same mindset. For the third time in a row, they presented a different draft, once again showcasing their flexibility and unpredictability on the Rift.

But if the G2 draft was unpredictable, the way they won the series’ last game was not. Focusing on obtaining early game advantages that allowed them to snowball and gain priority over neutral objectives, G2 moved to win the most fast-paced and quick game of the series. With skirmishes occurring almost every minute, starting with the first blood in the top lane, the third game was over in only 25 minutes. Despite Rogue proactive plays and well-time reaction to G2’s plays, it was nearly impossible for them to regain control of the game as G2 kept on widening the gap of advantages between them.

G2 demolished Rogue in the upper bracket final of the 2022 LEC Summer Split playoffs, thus making their way to their eleventh LEC finals ever. With this win, G2 consolidated their place in the top two of the playoffs, meaning they will skip the World Championship Play-In stage and go directly to the Group Stage.

League fans will see G2 play in Malmo next week at the first LEC LAN Finals since Athens 2019, where it was G2 themselves who raised the crown in front of the fans for the last time before the pandemic.

Note: The author of this article also works at the site we have linked above. We used the interview to get more context on the situation.

EG’s Jojopyun on audio issues that delayed 8-hour playoff series with TSM: ‘The headset just wouldn’t work … we just couldn’t hear each other’