Home League of Legends Blog Faker gives his thoughts on T1’s supposed ‘Group of Death,’ the team he wants to get revenge on at Worlds 2022, and more 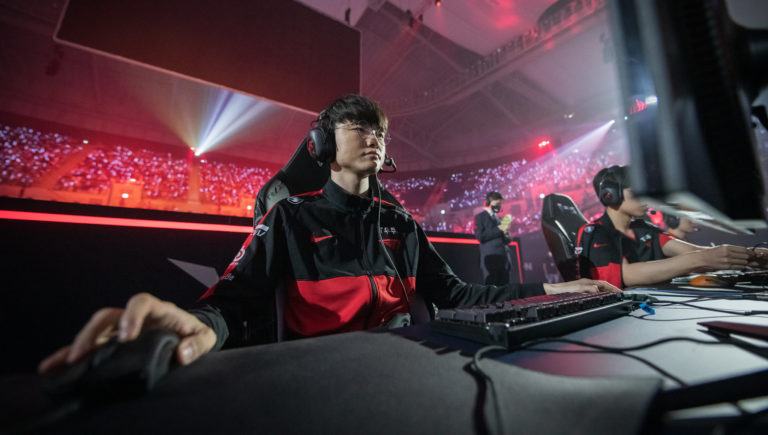 Since his competitive debut in 2013, Lee “Faker” Sang-hyeok has captivated hearts worldwide with his incredible prowess on the Summoner’s Rift.

The 26-year-old is considered to be the greatest League of Legends player of all time by practically every fan to watch the game. Still, over the past few years, the mythos around the legendary mid laner has waned after multiple disappointing exits from international events. This year, however, Faker aims to guide his young teammates to the organization’s fourth World Championship.

When Faker won the Summoner’s Cup last, it was 2016, with a different set of teammates. In an interview with Dot Esports, he acknowledged that the current iteration of T1 has “very different team vibes right now compared to the 2015 and 2016 season.” But after playing with these young stars for a whole year, Faker has been focused on building their team environment and structure for success.

Faker is also the oldest and most experienced member on the team by a large margin—AD carry Lee “Gumayusi” Min-hyeong is 20 years old, while Ryu “Keria” Min-seok will turn 20 on Friday, Oct. 14. Jungler Mun “Oner” Hyeon-jun will turn the same age this coming Christmas Eve, and the team’s top laner Choi “Zeus” Woo-je is younger than them all at 18 years old.

As a result, Faker must turn into not only a teammate and leader but also an older brother. Off the Summoner’s Rift, for example, he gives the lads handy tips and advice on what to do when traveling around the world for tournaments. During events, he also encourages them to keep a positive attitude when in a competitive rut.

Not everything is different about this version of T1, though. One team member Faker worked with extensively is head coach Bae “Bengi” Seong-woong, a teammate during their historic runs to back-to-back World Championships in 2015 and 2016. “I’ve been working with Bengi for many years, so we have no problems [with synergy],” Faker said.

He also explained that the “really smooth communication between each other” has led to great results and helped the former jungler communicate and encourage their younger players to perform at their best. This connection should prove essential if T1 wants to survive the “Group of Death” at the tournament.

T1’s group in the main event will consist of the 2022 LCS champions Cloud9, the defending World Champions Edward Gaming, and a team from the play-in stage of the tournament. It’s a tough class of opponents that would intimidate many different players, but Faker thinks this is the perfect challenge for him and his squad, especially after facing this exact version of EDG in last year’s group stage.

“It’s beneficial that we can finally meet EDG again, [because] I think this is a really good test for us based on matchups,” Faker said. “I can’t tell if this group is strong or weak… I think this group is pretty normal. But like I said, since EDG won Worlds last year, it’ll be good to test our ability [against them].”

Past the group stage, however, Faker said that although he’d like to face off against different teams, getting revenge against Gen.G in a best-of-five setting would be pretty sweet since they just lost against them in a 3-0 sweep during the 2022 LCK Summer Finals.

The two rivals are strong challengers for the crown, and should they meet during this World Championship, the world of competitive League will stop and watch the fireworks. But for now, fans will have to wait until the group stage begins on Friday, Oct. 7.

NA bounces back, Fnatic strengthen their grip, and COVID takes a backseat on second day of Worlds 2022

The Top 5 Funniest LoL Champions To Play in the Game