Home League of Legends Blog Emphasis on the top lane: The most-picked champions in the first half of the Worlds 2022 group stage 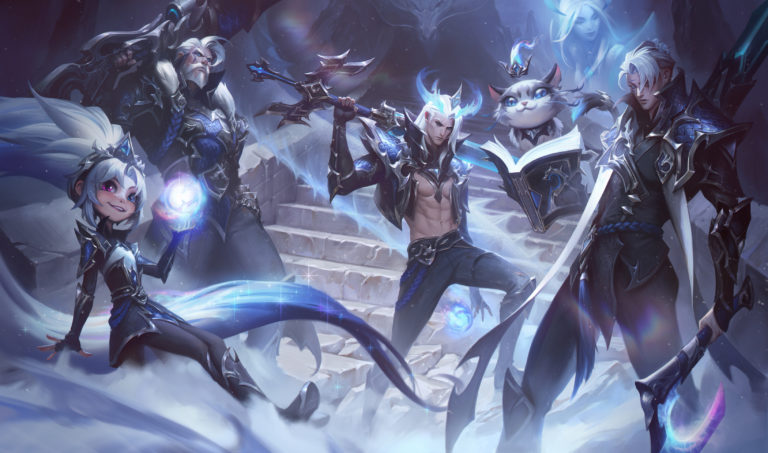 This year’s League of Legends World Championship has already officially set the record for the most diverse champion pool in the history of the international tournament—and we’re only halfway through the group stage.

Yet within those 100 different champions lay a handful that have completely dominated the first round robin of the group stage. Nearly every draft phase has involved these champions being picked or banned, leading to teams drafting entire compositions around them, or having to adjust accordingly to face them in the hands of their opponents.

Notably, many of these hotly-contested champions call the top side of the Rift their home—a sharp contrast from the bot-lane-focused meta of a few patches ago. Between being able to one-vs-five an enemy team and constantly locking enemies in place, these powerful champions have fully established themselves at the top of the Worlds meta.

Here are the champions that appeared the most during the first round robin of the Worlds group stage.

The Darkin Blade has been the most oppressive force at Worlds since the very first day of the play-ins. This trend did not stop with the first half of the group stage, rather the priority to pick or ban Aatrox grew exponentially, oftentimes being a major reason that certain teams found continued success.

Aatrox’s ability to skirmish in both the laning phase and within teamfights is unmatched among nearly all other top laners, bar the increased presence of a certain tanky tree. Though the Goredrinker build that has enabled Aatrox to be an unkillable machine for nearly two years has subsided, in its place players have opted for Eclipse to instead provide the champion with more movement speed, a shield, damage, and consistent survivability.

This top laner has been present in every single game of the group stage thus far, following nearly doing the same throughout the entirety of play-ins. It’s unlikely that Aatrox will fall out of the Worlds meta in any capacity, possibly even being a candidate for receiving a commemorative skin for this year’s winners.

In Patch 12.17, Maokai received extensive changes akin to a mini-rework that sought to turn the Twisted Treant from an E-throwing AP support back into the top/jungle tank he was created to be. This led many fans and players to predict that Maokai would finally jump back to the top of the meta—and he did so in dominant fashion.

Though still occasionally played as a support, Maokai has been a powerful pick in both the play-ins and first half of the group stage due to his natural bulk and multiple crowd control tools. Even without items, Maokai can emerge relatively unscathed in trades while locking opponents in place from a large distance—only to jump onto them and immobilize them further.

But what truly allows Maokai to take control of the map is the use of his Saplings. By throwing them into brushes, he not only empowers them to deal more damage to unsuspecting opponents but they act as pseudo-wards to keep track of enemies on a relatively short cooldown.

Thanks to these buffs, a champion that has not been competitively viable in years has now taken root on the Rift and is a staple part of the tank-oriented meta established at this year’s Worlds.

It wouldn’t be an international tournament if Azir wasn’t omnipresent.

The Emperor of the Sands has reemerged as the most contested pick in the mid lane across nearly all teams competing in the group stage. The champion’s ability to poke out enemies from a distance in the laning phase and escape dire situations with relative ease provides players with a rather easy path to scaling into the late game.

Yet Azir’s fullest potential sits in the power of his ultimate, Emperor’s Divide. Multiple teamfights throughout the group stage have been completely reversed simply by one press of this ability, scooping up any enemy unfortunate enough to be caught in its path and throwing them into the mercy of their opposition.

Despite being in one of the most versatile mid lane metas in the history of Worlds, Azir has once more stood out as a prized comfort pick for players across teams. Whether it be in lane or in teamfights, the meta relevance of Azir continues nearly eight years after his initial debut in League.

Sejuani emerged as one of the premier top lane choices this summer as tanks make a resurgence on the Rift. Not having to bring Flash thanks to her Q has allowed Sejuani to become a major lane bully with Ignite, then bringing Teleport for post-14-minute map pressure.

Yet even with increased priority in the top lane, Sejuani has not been performing to expectations. The champion is capable of surprising opponents during the laning phase with her natural bulk, mobility, and damage potential, though as the mid game draws near, she’s relegated to a standard tank and ultimate-tossing machine.

In a meta of non-carry junglers, Sejuani’s continued relevance forces teams to incentivize the damage from their carries alone, which has been detrimental to the Fury of the North’s win rate thus far. But as teams adapt further to the meta, Sejuani may be the piece needed to make an impact in the later stages of Worlds.

The bot lane meta has shifted dramatically from where it was when the regular seasons of the participants ended this summer. Zeri is no longer taking over games. In her place has been Caitlyn, the clear strongest ADC in Patch 12.18 that has very rarely not been banned in the draft phase.

Caitlyn’s access to one of the largest innate auto-attack ranges makes her a great pick for poking enemies in the bot lane to secure early leads. When paired with Lux, however, as she has been for most of this year, Caitlyn can ensure that enemies are locked in place for an extended amount of time, leading to quick kill secures thanks to her passive.

While Sivir and Lucian are certainly still potent forces in the meta, the Sheriff of Piltover has staked a firm claim on the bot lane and is likely to continue being a contested pick for the remainder of Worlds.

After controlling the bot lane meta for most of the year, everyone’s (least) favorite Magical Cat, Yuumi, has returned to the Worlds stage—this time equipped with a new, even more annoying build.

Since her release in 2019, Yuumi has remained one of the most controversial champions in League. Her unique playstyle of attaching to allies to empower and heal them without being targetable herself gives her a relatively low point of entry for players with high success rates. And with items, the healing she provides is unmatched by almost all other enchanters.

But that’s not the Yuumi we’ve seen in the group stage. Instead, nearly all teams that add Yuumi to their teams—normally accompanying a Sivir—have strayed away from the support Mythic and Legendary items in favor of Luden’s Tempest and full AP damage. In doing so, Yuumi’s Q deals massive damage to enemies that it makes contact with, and opponents are unable to retaliate against an untargetable foe.

Though Yuumi has typically been saved for use in a very specific bot lane pairing, not banning the champion has brought her to a 100-percent win rate across the four games she was played in—likely to remain high as Worlds continues.

WTF!? These NEW Season 13 ITEMS Are ACTUALLY SO FUN On Renekton!