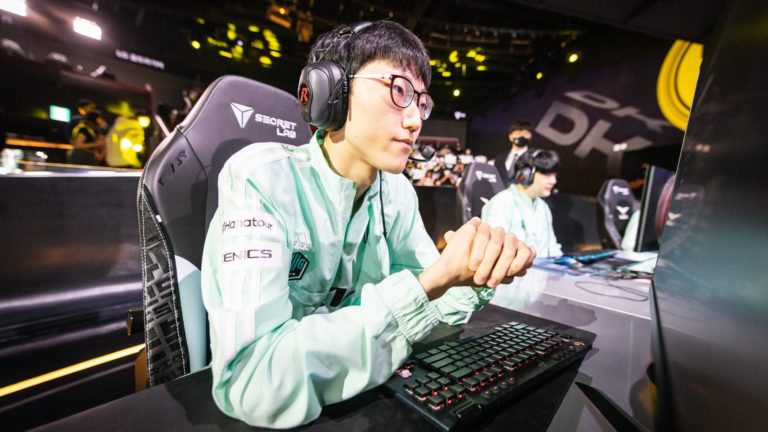 DWG KIA top laner Jang “Nuguri” Ha-gwon has discussed the League of Legends team’s form heading into Worlds 2022, and expressed his confidence after a shaky LCK Summer Split where the squad finished in fourth place and had to fight for their spot in the tournament.

In an interview with Korizon ahead of DWG KIA’s bootcamp in North America, Nuguri thanked the meta shift for his newfound confidence. He had previously struggled to find his confidence following a six-month break and also had trouble adjusting to the “tough meta” alongside jungler Canyon.

“We did look shaky through Summer,” he said. “But I’ve been noticing the team feels more solid ever since we’ve been preparing for Worlds. We feel more aligned as a team… Our individual performance just went up.”

When competing at Worlds, DWG KIA will go from Patch 12.14 directly up to 12.18, which means they have a lot of adjustments to make in scrims. But Nuguri says he and Canyon feel “more at home” in this meta, which brings back Udyr, Maokai, and Lee Sin, among other champions.

The top laner mentioned Kennen and Camille as rising champions he’s looking forward to playing in the group stage and agreed that the meta was shifting more towards top laners than the bot lane—which had more of an impact in Summer.

DWG KIA have been drawn in a challenging group with teams like JD Gaming and G2 Esports. Nuguri considers JDG a worthy opponent, saying they looked strong and that “top-jungle is the crack of the team.” But he is confident in earning first place and winning it all to get a second World title under his belt.

The team will fight for a playoff spot starting on Oct. 7. Meanwhile, the Worlds Play-In stage will kick off on Tuesday, Sept. 29.

Caps, Razork, and other LEC stars divulge which players and teams they want to face off against at Worlds 2022