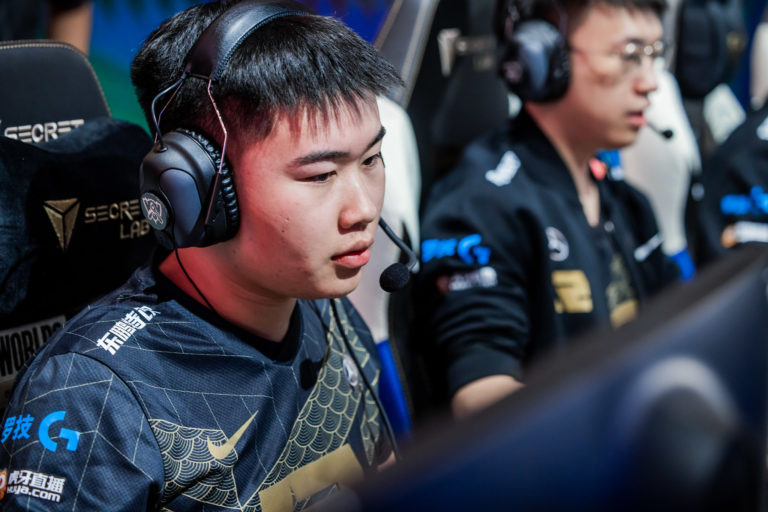 Royal Never Give Up entering the 2022 League of Legends World Championship through the play-ins stage, despite being the reigning MSI champions from the LPL, led many to believe they’d have little issue joining their region’s teams in the main event group stage. Yet after their surprising loss to DRX, the LCK’s fourth seed, RNG no longer had a clear route to the top, now having to move alongside the rest of the playing field.

Recognizing what went wrong yesterday, RNG completely restructured their draft around comfort picks today, taking advantage of MAD Lions’ continued unsteadiness—despite having already accrued two victories. RNG’s early lead through their jungler, Wei, quickened the effectiveness of his team, a pace that MAD could not keep up with.

This loss is the first that the LEC has experienced at Worlds thus far, though MAD remain near the top of Group A. As MAD players have pointed out already, the team has struggled to maintain consistency in their matches, losing sight of the aggressive plays that carried them through the LEC Summer Split. Head coach James “Mac” MacCormack expressed in the post-game interview that he was “happy with how the players did, staying in [the game],” but that Wei’s lead really threw off the team.

Jungle pressure has been among the most important factors in teams snowballing early leads thus far at Worlds. With resurging meta picks like Hecarim and Maokai at the disposal of many teams, junglers have placed more priority on keeping their top and mid laners ahead, particularly around the Rift Herald spawn.

RNG’s jungler Wei did not have many opportunities to show his understanding of the role yesterday, so today he ensured that MAD would not forget what he’s capable of. In less than 15 minutes, Wei had four kills for himself as Graves, each with a bit of help from the team’s support Ming landing precise crowd control on Leona.

Even though MAD’s jungler Elyoya was given control of Trundle, who is capable of disrupting movement with a precisely-placed pillar while speeding himself up, the team had very little room to initiate fights for themselves. Their hyperfocus on Wei left them susceptible to Xiaohu and Breathe from flank points, trapping the LEC fourth seed in between a magical rock golem and a man with a big gun.

MAD were unable to display the synergy between Nisqy and Elyoya because of how disruptive Wei had become just a few minutes into the game. This pairing, a major factor in what earned Nisqy the MVP award of the 2022 LEC Summer Split, needs to return as the prime strategy for success or else games may continue to slip out of their control.

No Nilah, no problem

Many fans have predicted that GALA, the ADC for RNG, will be one of the players to perform best at this year’s Worlds, mostly due to massive fluctuations in the meta broadening his already-large champion pool. Against DRX, GALA opted to play League’s newest champion, Nilah, who has yet to be effective in any region since her release and struggled to make an impact in and out of lane.

This time, GALA was handed Aphelios, a champion he has a 70-percent win rate with this year alone, according to Esports Bet. While he wasn’t a major part of many early-game fights for RNG, he was slowly but surely becoming a force MAD did not want to contend with in a different way: farming.

GALA was left alone in the bot lane within 10 minutes as Ming roamed to assist Wei’s uncontestable lead. MAD’s support Kaiser was forced to answer Ming’s roaming, leaving the two opposing ADCs to match one another in mental warfare, knowing that they could be of great importance in the late game.

But Aphelios’ many tools (five weapons plus subweapons, to be exact) allowed GALA to innately win trades with UNF0RGIVEN when he stepped up, granting him a considerable CS lead and, by extension, a quicker hold of items. GALA had successfully scaled into the late game and became a teamfight machine, going from just one kill in the early game to a total 5/0/7 KDA as MAD’s Nexus fell.

RNG (1-1) move on to face the LLA representatives Isurus tomorrow, while MAD (2-1) are set to take on the VCS’ Saigon Buffalo.

What are those?: Latest delay at Worlds 2022 is for the strangest reason yet

NA bounces back, Fnatic strengthen their grip, and COVID takes a backseat on second day of Worlds 2022