Home League of Legends Blog Defy the odds: Odoamne reflects on LEC triumph and an uncertain future with Rogue 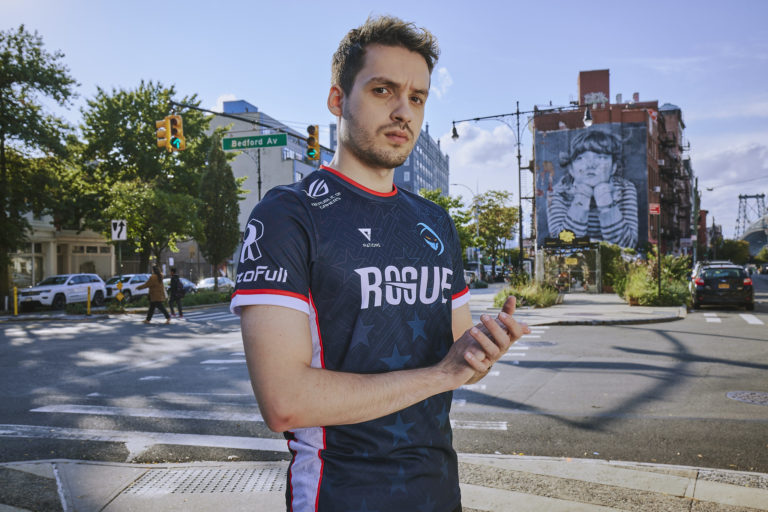 Despite competing in League of Legends professionally for almost 10 years, Andrei “Odoamne” Pascu struggled to win a trophy of his own. Though playoffs and World Championship qualifications were normal territory for the top laner, that taste of victory had ever-eluded him—until this year.

Odoamne, returning to Rogue for his second consecutive year after roster restructuring for the 2022 season, led the team through a period of hefty uncertainty regarding what they would be capable of. Rogue would end up defying these expectations with a first-place finish in the LEC Spring Split, coupled by a 6.42 KDA for Odoamne bested only by two of his teammates and Fnatic’s ADC, Upset—only for the team to be swept in the finals of playoffs.

For most of the LEC Summer Split, fans were focused on G2 Esports, the Spring champions, while also keeping an eye on Fnatic, a team so close to missing out on its first playoffs qualification in its history.

But being overlooked only fueled Rogue. The team took back control of the narrative, once again taking down some of the best talent in the region, then emerging as the Summer Playoffs champions and the first seed of the LEC to enter the 2022 World Championship.

For Odoamne in particular, this marked the end of a nearly decade-long journey to lift an LEC trophy. But with Worlds just around the corner, he lacked the opportunity to fully appreciate the moment he’d been working towards for most of his life.

“It’s funny, because it’s been a month and a half since the LEC finals, and for me still it hasn’t [sunk] in since my eyes were on Worlds,” Odoamne said. “So I don’t know, maybe now with some time off I can finally get that feeling. I won my first ever title after such a long time—it will sink in and I’ll truly appreciate it. The year was not over after the LEC finals, I could not put any time into feeling happy that I won LEC.”

Rogue’s group stage run started with the best performance of any Western team. The team emerged from the first round robin undefeated against professional League giants like the LCK’s DRX and the LPL’s Top Esports. But during the second round robin, the team faltered, winning only one game and becoming the subject of controversy after a bug was discovered that could have changed the outcome of the group.

Despite the poor results from week two, Rogue became the only Western team to qualify for the quarterfinals, only to fall to their first opponents in JDG in a 3-0 sweep. Though they advanced this far, something Rogue weren’t able to do last year, Odoamne was disappointed that he and his teammates could not fulfill the expectations that accompany being the LEC’s first seed and final Western representatives fighting for the Summoner’s Cup, explaining that what they did “didn’t feel it was enough.”

The LEC and LCS play significantly less games throughout the year compared to the LCK and LPL, with their schedules consisting of best-of-ones during the regular seasons until playoffs, the only two times during the year these regions compete in best-of-fives domestically.

Though he believes this isn’t the most pressing factor that separates the Western regions from the East, Odoamne equated these structural differences as some of the things that continue to hold the LCS and LEC back from truly standing out among the competition internationally. However, neither the LCS nor LEC has revealed plans to implement structural changes for the upcoming year, although the LEC 2023 Spring Split is expected to begin early.

“[The LCK and LPL] play potentially triple the amount of games we do leading up to Worlds,” Odoamne said. “For lack of better words, it’s a bit cringe. The fact that we play so little games throughout the year is ridiculous, because when you go to Playoffs, and you can go up to five games [for multiple series] in a row, and all of a sudden you played 50 games in Playoffs and only played 18 games in a regular season.”

Rogue announced a few weeks ago that, for the upcoming 2023 LEC Spring Split and beyond, it would be entering a partnership with ERL team KOI, which would bring the team’s name and its players under joint leadership onto the main LEC stage. Odoamne, who has been playing for Rogue since the 2021 Spring Split, is uncertain of what his immediate future holds following the announcement of this partnership, though is steadfast on wanting to continue his professional League career well into the future.

“Rogue so far this year has not tried once to re-sign me, even after we won the LEC finals,” Odoamne said. “I’m gonna probably have to go into the off-season and explore my options and see what’s up, but I do plan to keep my run going in the LEC and potentially start a new legacy for myself to win more trophies.”

It’s unclear what Rogue, which will now be known as KOI, will look like in the upcoming Spring Split, but Odoamne made it clear that regardless of where he goes, his thirst to win has not yet been quenched. With a year of defying expectations to his credit and an LEC trophy finally counted amid his accomplishments, he’ll be a player to watch next year no matter what team he plays for.

Dot Esports has reached out to Rogue for comment on Odoamne’s contract, but the org has yet to comment at time of publishing.

Coach Perkz? The LEC legend is open to it—but he’s got some business to finish first