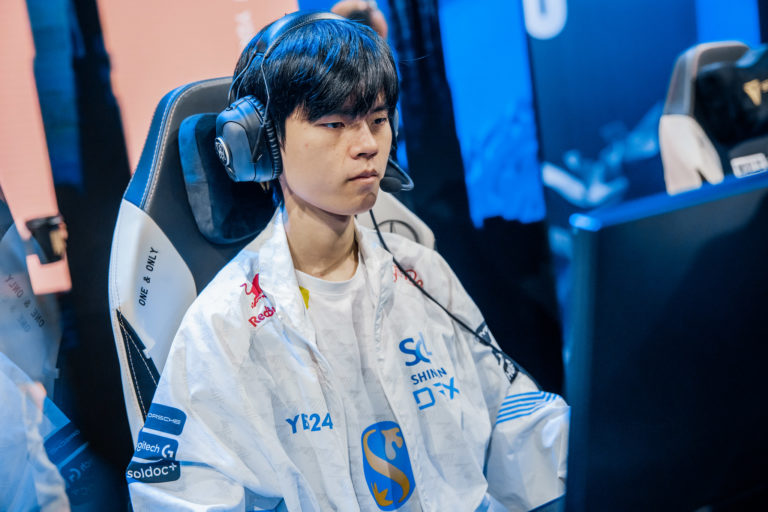 The reigning world champions versus the only team left that started in Play-Ins.

The final day of the 2022 League of Legends World Championship quarterfinals could not have had higher stakes for these two teams—and both ensured they’d fight until the bitter end.

Despite being overlooked all year in favor of other LCK behemoths like Gen.G, T1, and DWG KIA, DRX continues to exceed any and all expectations as they continued their run. But they didn’t just defeat any team to do so; they took the reigning world champs, the LPL’s EDG, to five games in the second-ever reverse sweep in the history of Worlds.

This is an even more notable feat for DRX’s ADC, Deft, who not only celebrates his birthday today but finally advances to a Worlds semifinals for the first time in his nearly decade-long career. Their mid laner, Zeka, also enjoyed a dominant final game.

Deft played alongside Scout and Meiko on EDG in 2015 and 2016, where the ADC gained a large amount of popularity for bringing immense success to the LPL team within just his first split.

Yet just one split later, Deft had moved to a different region, the LCK, where he maintained his momentum, though could only earn himself one domestic title in five years.

The three players missed the opportunity to stare down one another on the Rift at last year’s Worlds, as Deft was unable to make it past the quarterfinals, whereas Scout and Meiko would go on to lift their first Summoner’s Cup. Yet today, nearly six years later after these players shared a team, they stood opposite one another at the Hulu Theater in New York City, with the opportunity to keep their Worlds runs alive.

Neither team wants to go home

Much of the series was defined by the willingness of DRX’s support, BeryL, to opt for rather obscure champions in his role that flourish in harassing enemies from afar, including Heimerdinger and Ashe. Even though for most of the series he was an easy target of free gold for EDG, BeryL’s willingness to roam across the map and disrupt other lanes ensured DRX could keep up with their opponents, being vital to stopping EDG’s potential sweep.

Yet, because of how close each game was, it was imperative the teams’ ADC carries, Deft and Viper, found opportunities to establish themselves as credible threats that could escalate gold leads.

In game two, Deft saw his opportunity to make a Worlds moment by attempting to backdoor a Baron-occupied EDG. But with just one basic attack left to destroy the enemy Nexus, EDG’s inhibitor respawned, leaving Deft to a grisly fate and EDG to venture to match point.

But when fans felt Deft’s mental had been shattered, he found yet another opportunity to shine; this time as Draven, a champion he had only played two other times in his career. The ADC led DRX through a slow, methodical game, finally cashing in nearly 2,000 gold at once in a late-game teamfight that turned him into a one-man wrecking machine.

But League is a team game, and to win a series like this, you can’t rely entirely on one player. With Pyosik’s Sejuani, no part of EDG could get through DRX’s front line in game four, forcing the reigning champs into a possible reverse-sweep scenario.

Here, after having very few opportunities to stand out in the series thus far, was where DRX’s mid laner, Zeka, found his opportunity to shine.

As Sylas, a champion that has been widely contested at Worlds with a 75.4-percent pick/ban rate, Zeka utilized the enemy ultimates better than the champions that own them normally—securing four impressive solo kills on his lane opponent.

With one final quadra kill, Zeka cements the next step of his legacy with quarterfinals qualification at his first-ever Worlds, done so with only the second-ever reverse sweep in the history of the tournament.

After three weeks of non-stop action among sixteen of the best teams in the world, the biggest international tournament will be making its way out of the Big Apple and into the land of peaches aplenty.

To start the semifinals stage in Atlanta, Georgia on Oct. 29, the LCK’s second seed T1 will battle the LPL’s first seed JDG.

The following day, DRX moves on to compete against the LCK’s first seed, Gen.G. In what fans around the world are referring to as one of the more notable series in Worlds history, DWG KIA took Gen.G to five straight games with the possibility of a reverse sweep looming. However in one final back-and-forth game, Gen.G ended the run of the former world champions.

But DRX have not been able to stunt the progression of Gen.G at all this year, having lost each time they met in the LCK regular season.

Should the LPL fourth seed continue their miracle run that began three weeks ago in play-ins, they’re going to have to institute the confidence they showed today.