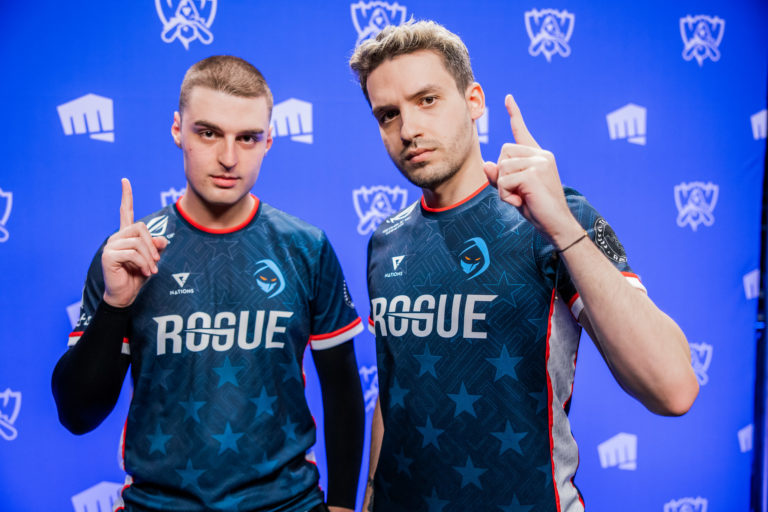 After a perfect start at the 2022 League of Legends World Championship, Rogue’s star AD carry Markos “Comp” Stamkopoulos is on pace to join the top marksmen in the tournament’s history.

Comp leads all players at Worlds 2022 with 22 kills through three games in the group stage, with a scorching hot 13 KDA while participating in 75 percent of his team’s total kills, according to League stats aggregate Oracle’s Elixir. He even had a nine-kill performance against one of the toughest teams at the event, Top Esports.

His efforts have been essential in Rogue’s 3-0 start through the first half of the group stage, but he’ll need to level up even more if this team wants to maintain their hold over first place in a group with DRX, TES, and GAM Esports.

Comp is also on pace for the second-most kills of any player in Worlds group stage history. If he is able to maintain at least his current average of just over seven kills a game, he will have around 44 kills through six games in groups. This eclipses every top group stage kill leader in Worlds history except for one player.

Gu “imp” Seung-bin is a retired ADC who previously played for the LCK’s Samsung White during their 2014 run to the Summoner’s Cup. During that group stage, he racked up an astounding 57 kills over six games, according to Oracle’s Elixir. He also had 42 assists with only seven deaths, while holding 37 percent of his team’s total kills throughout that span.

If Rogue doesn’t play any tiebreakers heading into the knockout stage of this year’s tournament, Comp would need 36 kills over three games to beat Imp’s current record. It’s a record that will be hard to beat, but if Rogue improve even further or are forced into a tiebreaker, the European marksman could get pretty close.

It also helps that Rogue’s games have lasted pretty long during groups, with the team’s average game time reaching 35.8 minutes, according to Oracle’s Elixir. More time on Summoner’s Rift means more time for Comp to collect more kills for the record.

You can catch him and the rest of Rogue as they try to keep the ball rolling when their Worlds group play continues on Saturday, Oct. 15 at 2pm CT.

There Is NO WAY This Item ACTUALLY Makes It To Season 13… Right??

The Best Karma Tips & Tricks For Beginners For All Roles!