Home League of Legends Blog Can a Yuumi rework repair years of vitriol from League fans? 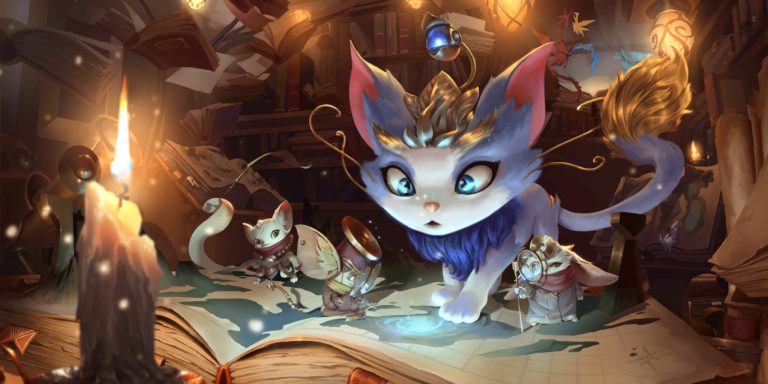 Riot Games has finally answered the prayers of League of Legends players everywhere. Yuumi, the game’s most controversial champion, is getting a full-blown rework.

Ever since her initial release in 2019, Yuumi has been one of the most hated champions on the League of Legends roster. The Magical Cat’s purely defensive, supportive, and passive gameplay style has given way to the popular belief that she’s boring to play as and against, with players often becoming frustrated with how easy it is for Yuumi players to control the flow of a game while doing minimal work in comparison to other champions at the support position.

The frustration that players have built up against Yuumi for years has slowly turned into a burning dislike for the champion. While Teemo, in comparison, was League’s original punching bag, serving as both a mascot for the game and a character players love to hate, Yuumi has evolved into a champion that many players simply hate outright. A few years back, Riot even entertained calls from the League fan base to delete the champion altogether. Those attempts were, needless to say, unsuccessful.

Now, as Riot attempts to right its wrongs and remedy a champion that’s been viewed through a negative lens since her launch, the million-dollar question for the League developer is this: How much does Riot have to do with a Yuumi rework to wipe the slate clean and allow players to look at her in a neutral or even positive light?

Riot has taken note of players’ frustrations with Yuumi. “While we do think there’s a sizable player base that would love an intense champion focused on weaving between healing and shielding all four teammates, we believe that such a complex playstyle combined with Yuumi’s frequent untargetability has been one of the sources of her many frustrations,” the developer said in an update today.

When playing against Yuumi, the worst feeling in the world is having a window of opportunity to take her out of the equation once she unattaches from a champion, only to have her re-attach to another ally, closing your window prematurely.

But perhaps the most glaring reason as to why Yuumi has been so hated by League fans ever since her release is that she plays so strikingly different from the rest of the champions on the game’s roster.

“In short, we’re not satisfied with Yuumi’s current state and are making progress on a rework for her aimed at reducing some of the things that make her frustrating to play against, while retaining the core gameplay pattern her players have come to love,” Riot said.

Her nearly fully responsive gameplay loop makes Yuumi less of a playmaker and more of a play-denier. Instead of diving into the enemy team and looking to be the catalyst for a big moment, Yuumi is usually in the backline, darting between allies and dishing out heals. The champion thrives best in a defensive position, which is counterintuitive to the most exciting gameplay moments League has to offer.

Yuumi’s purely defensive and supportive role is not exciting to play against, and for many players, it’s excruciatingly unintriguing to play as.

“We want to rework Yuumi to be an easy-to-learn Enchanter that’s all about protecting and enhancing her allies,” Riot said. “This means a greater emphasis on how Yuumi can aid her allies earlier in the game by trading her damage and crowd control for more early power and defense.”

League is a game that’s traditionally been balanced around its pro scene, with the effects of the changes made for the game’s best players trickling down into solo queue. At this year’s World Championship, Yuumi was easily one of the most impactful champions at the tournament with a pick/ban rate of 95 percent. Although it’s likely that Yuumi’s rework was already in the pipeline for some time prior to Worlds, a tournament where she unquestionably dominated the meta should be the last piece of evidence players need to push a rework for her into action.

Yuumi has been a difficult champion to balance for Riot since pro players have found ways to completely flip her on her head, maximizing her healing windows and making her even more difficult to punish than she normally is.

“In high skill play, Yuumi players have learned to optimize unattaching to trade their own health to accompany trades,” Riot said. “Combined with frequently unattaching to trigger their shield off cooldown, Yuumi lanes simply had more health to trade versus enemies so that even hyper aggressive opponents like Draven and Lucian struggled against the cat.”

Related: Best AD carries to pair with Yuumi in League of Legends

Whenever Yuumi snuck through the ban phase at the Worlds main event, she practically guaranteed a free win for whichever team picked her up. Yuumi’s eight picks translated into a perfect 8-0 record at Worlds, while Yuumi players posted a KDA of 13.8 with the champion, according to League stats site Games of Legends. In total, Yuumi players combined for nine deaths in eight games.

Yuumi’s success at Worlds came to the dismay of League fans as the stars aligned for the first live crowd at Worlds in three years to viciously boo Yuumi whenever her feline face made it through the ban phase.

For the Yuumi rework to land on its feet, Riot needs to find a way to balance the champion in a way that allows pros to still maximize her skill cap, while newer players can still look to Yuumi as a throughline for learning, similarly to champions like Ashe, Garen, and Master Yi.

Additionally, the champion needs to gain some sort of playmaking ability that makes her stand out as more than an appendage on her teammates’ waists. Playing support in League is at its most fun when you’re the one making the tide-turning play. Currently, Yuumi lacks that capability, but if something to turn her into a playmaker was added to her kit with this rework, she would instantly become a far more appealing pick to many players.

Yuumi’s rework is still “in the early stages,” according to Riot, and players should expect to see more details about the champion’s changes sometime in 2023.

Cat’s out of the bag: Riot to make Yuumi less unbearable with upcoming rework in League