Home League of Legends Blog Another day in the office: 5 LCK players emerge from the Worlds 2022 group stage with the highest KDAs 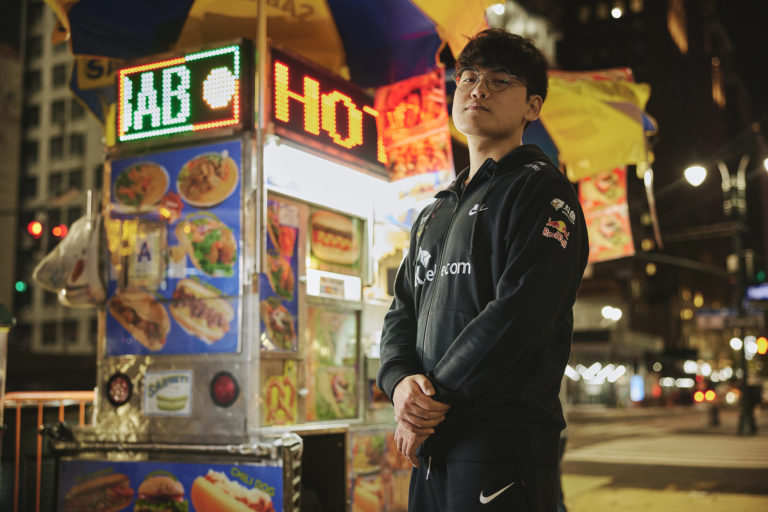 Halfway through the 2022 League of Legends World Championship, the LCK and LPL have continued their annual tradition of domination over other teams from around the world. In doing so, one of these regions has taken control over the highest KDAs of the group stage, likely to only grow as the tournament continues.

Five players across three LCK teams currently stand out among the competition for their immense KDAs, each score being well over 10 within 10 to 12 games. These KDAs are not confined to players of any specific role since nearly every single role in the game is represented among these top five players.

Among these five members of the LCK are both veterans and newer players, all having run through their competition in the group stage with relative ease and moving to the quarterfinals stage—two of the teams doing so as the first seed from their groups. While only one team can emerge from Worlds on top, each of these players is set on further cementing their legacies through stats.

Who can stop the T1 bot lane?

Sitting at the top of the KDA leaderboard with a whopping 18.25 is T1’s ADC Gumayusi, who has continued his reign of dominance in the bot lane from throughout the year in the LCK into this year’s Worlds. He and his support, Keria, have been touted as one of the best bot lane duos in the world for what they’ve been able to accomplish in such little time: from leading T1 to an undefeated Spring Split to advancing to Worlds for the second time.

T1 went through the group stage with a record of 5-1, successfully taking down the LPL’s EDG, LEC’s Fnatic, and the LCS’ Cloud9 in the process. Gumayusi showcased clear control of the meta with deathless games in all of T1’s wins, doing so with a combination of meta and comfort picks like Sivir and Kai’Sa.

His support, Keria, emerged from the group stage with the third highest KDA at 15.4, attained through his willingness to be a menace to opponents regardless of where they were on the map. Notably, most of this KDA was attained by playing enchanters like Nami and Yuumi, which created dominant bot lane champion combinations that brought out the fullest potential of the synergy between these two players.

Keria was even more than willing to play Soraka, a champion that has become situational in the evolving meta, against EDG in a match that many fans expected to bring both teams to their limits. Yet thanks to this pick, T1 completely snowballed the game from an early lead. Keria’s perfectly-placed silences rendered almost all engages from the enemy team futile, all the while healing his team to full.

Gen.G’s shared control of the KDA charts begins with their jungler, Peanut, who used the group stage to cement himself as one of the best players in this role internationally with a KDA of 16.2. The jungler was a crucial part in Gen.G successfully dethroning T1 and preventing them from running through the entire 2022 season of the LCK, having finally earned a championship victory since his first few years of playing nearly half a decade ago.

Yet Gen.G’s run through Group D was anything but simple. Though they entered the second weekend of the group stage at 3-0, the reigning LCK champions were matched almost evenly by the LPL’s RNG, who had successfully ventured to the top of the group through the play-in stage. The two teams met once more on the final day of the group stage, where Peanut’s Vi led a full dive composition into a tiebreaker match for first place that only afforded the LPL representatives a total of two kills.

The team’s mid laner, Chovy, joins the top of the ladder with a KDA of 12.8. In a region full of talented players who call the mid lane home, Chovy has always remained at the forefront of conversations, though has struggled to fully establish himself as the “best” due to back-and-forth international and regional performances.

But at this year’s Worlds thus far, it’s hard to contest claims that Chovy is one of the best the world has to offer. In nearly every game that Gen.G played, Gen.G placed their priority on Peanut working to get Chovy ahead, understanding that Chovy’s potential to carry games was extremely high. This was most notable in the final two games against RNG, where Chovy brought his Sylas to new levels, remaining an unkillable raid boss with a combined two-game score of 13/0/8.

Showmaker puts on a show

The fifth-highest KDA from the group stage belongs to DWG KIA’s mid laner and former world champion, Showmaker, who boasted an 11.5 KDA. Showmaker has been a prominent part of the LCK—and more specifically, DWG KIA—for over five years, where he’s established himself as one of the most overwhelming obstacles that players new and old have to overcome to further their careers.

Just last year, Showmaker took DWG KIA to the finals of the World Championship, only to be taken down by EDG, a match that may take place once again should DWG KIA beat the reigning LCK champions, Gen.G, in the quarterfinals. Though the LPL has been the kryptonite for DWG KIA once more at this year’s Worlds, Showmaker has emerged from each game, win or lose, with incredibly high scores on his comfortable mage picks like LeBlanc and Azir.

Since all of the LCK teams that qualified for Worlds are still in contention to win the entire tournament, it’s likely that these five players, or possibly others from the region, will continue to contest these highest KDA scores as the final stage takes place. The LCK will begin their quarterfinals run with T1 taking on RNG this Friday, Oct. 21, followed by the battle of the Korean teams with DWG KIA against Gen.G on Saturday, Oct. 22.

The SECRET OP Champion to CLIMB FAST on PATCH 12.20 – League of Legends