Home League of Legends Blog A rematch years in the making: DWG KIA reignite rivalry with G2 with lopsided victory at Worlds 2022 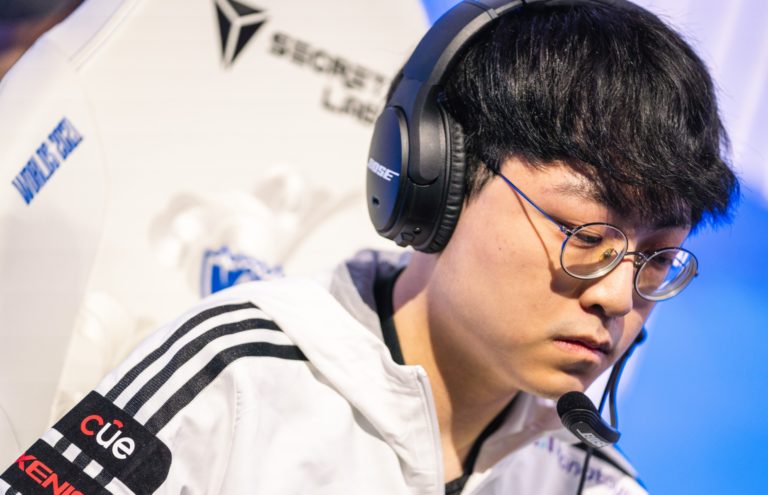 Although Cloud9 and Fnatic kicked off the first day of the Worlds 2022 group stage with perhaps the most well-renowned all-western rivalry in League of Legends, G2 Esports and DWG KIA followed shortly after with a new-school grudge match that spans well past the Prime Meridian.

Dating back to their first-ever matchup in 2019, G2 and DWG KIA have split their individual games four to four, and their overall matches one to one. Today, DWG KIA pushed the advantage in their favor, winning the first best-of-one between them in surgical fashion.

And for G2, it was over early. After DWG KIA earned an early ace near the Rift Herald, they were able to press their advantage in both gold and objectives, quickly taking the game out of reach for G2. Just 22 minutes in, DWG KIA earned their second ace of the game and were up by 10,000 gold—a mountain that proved insurmountable for G2 to overcome. They would go on to lose in 32 minutes.

Prior to today, the two teams hadn’t played since the semifinals at Worlds 2020, when DWG KIA (then DAMWON Gaming) swiftly denied G2 a second-straight world finals appearance in 3-1 fashion. And although some of the nameplates have changed since that tournament, half of the core players involved have stuck around, including the teams’ respective mid-jungle pairings of Jankos and Caps and Canyon and ShowMaker.

Among those four players, it’s ShowMaker, unsurprisingly, who has the strongest numbers in the rivalry. Across the nine games in which DWG KIA has played all-time against G2, ShowMaker has owned the European squad.

Today, he finished with a perfect scoreline of 8/0/4, a kill participation mark of 71 percent, and a champion damage share of 27 percent. Dating back to his first contest against G2, ShowMaker holds a KDA of 5.5 in games against them all-time.

Tomorrow, DWG KIA will look to continue to keep the ball rolling against LPL champions JD Gaming, while G2 will make the attempt to bounce back against Evil Geniuses.

Riot MESSED Up HUGE! This GUY Is CRAZY With These Changes!

Reign of dominance: T1 topple the world champions in group stage of Worlds 2022