Home League of Legends Blog 100T and CTBC will need a miracle to overcome RNG and Gen.G in Group D of Worlds 2022 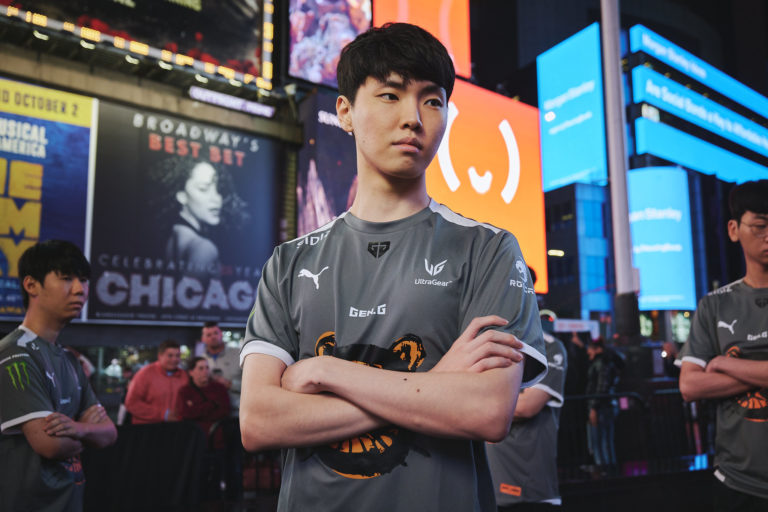 Group D—consisting of 100 Thieves, Royal Never Give Up, CTBC Flying Oyster, and Gen.G—seemed like a straightforward pool from the moment the 2022 League of Legends World Championship groups were drawn. The reigning MSI champions RNG separated themselves from the rest of the pack immediately with a 3-0 scoreline after the first round robin largely because of their grasp on the meta and long history of dominance on the international stage.

Gen.G, the first seed from the LCK, seemed like a strong enough team who can contest the frivolity and restlessness of RNG thanks to their capability of swift and almost effortless meta adaptations. But 100T and CTBC Flying Oyster have found themselves playing in a group way out of their league since RNG and Gen.G have, time and time again, displayed incredible talent paired with resilience.

Can 100T and CTBC catch up to RNG and Gen.G, and the current versatile meta, during the second round-robin stage of Worlds 2022 or will they return home devastated and lost for words?

The reigning MSI champions have already showcased that they are well-versed in the Worlds 2022 meta that involves teamfight-oriented comps. These comps usually consist of a tank and a bruiser in the top lane or jungle role like Sejuani and Ornn, a hyper-scaling mage in the middle lane like Azir or Sylas, and meta marksmen like Caitlyn and Kalista paired with the support that principally compliments the AD carry’s playstyle like Lux or Renata Glasc.

Aside from that, RNG have always had an intriguing playstyle where they combine thought-out aggression with a refined and controlled approach to their opponent. In other words, RNG don’t disrespect their opponents no matter their region or status but rather look to capitalize on the enemies’ mistakes, like carries overstepping their boundaries and aggressive positioning. These patterns were seen in their game against Gen.G, where RNG’s Breathe got a kill on Ruler even though four players were ganking him.

RNG’s players have, time and time again, showcased strong team cohesion and awareness that makes breaking their ranks almost impossible. This was clearly shown during the match between 100T when RNG repelled every 100T effort to nullify their scaling with early ganks. Standing tall in the face of Closer, RNG didn’t diverge from their original plan to scale, and as time passed by, their victory became apparent.

In the final round robin during the group stage, RNG will still be a force to be reckoned with. Since they had extra time to perfect their calm, cool, and collected strategy that slowly chokes the enemy out of vision, gold, and experience, RNG should be stronger and more difficult to defeat than ever.

Gen. G have no trouble keeping up with RNG’s tempo

Gen.G are similar to RNG when it comes to understanding the meta and adapting since they understand Maokai and Kalista should never go unbanned. In their match against 100T, they quickly adapted their team comp by including Trundle in the jungle to counter 100T’s frontline of Aatrox and Poppy.

Besides that, Gen.G always have a clear idea of what the match should look like. Understanding their team comp was far weaker in the early game in a match against 100T, they spent the laning phase nullifying the pressure from Ssumday’s Aatrox while giving enough room for their carries Aphelios and Azir to scale and eventually shred 100T’s frontline.

Unlike CTBC, who restlessly tried to set Gen.G behind during the final day of the first round of round robin with Lee Sin’s ganks and invades, Gen.G don’t hesitate at all once the opportunity presents itself. After spending the early game avoiding ganks, Gen.G saw a huge opportunity in the form of a bot lane four-man dive and immediately pulled the trigger. From then on, Gen.G’s snowballing couldn’t be stopped.

Although Gen.G are not far skill-wise from RNG, their execution fails them from time to time, as seen when they struggled to get Azir ahead in their match against RNG and Ruler died to Breathe as Senna in a four-man gank. That being said, Gen.G are a heavy favorite for the runners-up of Group D.

CTBC and 100 Thieves are drowning

It’s no secret that CTBC and 100T are struggling in Group D. Since these teams have only one win in total, it’s glaringly obvious there’s a whole series of issues they need to fix if they plan on eliminating Gen.G from contention for the knockout stage.

Both teams need to work on their game plan. When we look at the game between Gen.G and 100T, we can easily see 100T are only trying to answer Gen.G’s pressure in the bot lane instead of focusing on their winning top lane. Even though Ssumday spared no effort when trying to carry 100T, Gen.G—who heavily invested time, gold, and effort into their carries—quickly saw their investments pay off.

We’ve also seen CTBC and 100T struggle with their decision-making. CTBC had the upper hand during the early game against Gen.G. But they hesitated too much and, paralyzed in their analysis, were too afraid to act. And since timing is everything in League, they lost their lead and tempo before they could even realize it—and, eventually, the game.

Other than that, both CTBC and 100T have been brave enough to experiment with the meta. But the poor execution during the match between CTBC and RNG with Tristana and Kennen shows they should master the traditional meta before experimenting.

CTBC and 100T should work on their mental since it’s obvious they are under huge amounts of pressure as soon as they enter Summoner’s Rift. This normally results in them being afraid of making a play and indecisiveness. But this exact approach is costing them games against giants like RNG and Gen.G. Instead, they should at least attempt to make a play, no matter the result.

If CTBC and 100T put their time to good use, they could potentially knock Gen.G out. But both teams suffer from a wide variety of issues that can’t simply be fixed with a band-aid. So, it’s highly likely we’ll see Gen.G and RNG in the knockout stage.

Group D’s second round robin of the group stage will be played on Sunday, Oct. 16.

WTF!? SEASON 13 ITEMS ARE CRAZY!? Cho’gath Should NEVER Get THIS Much Health!