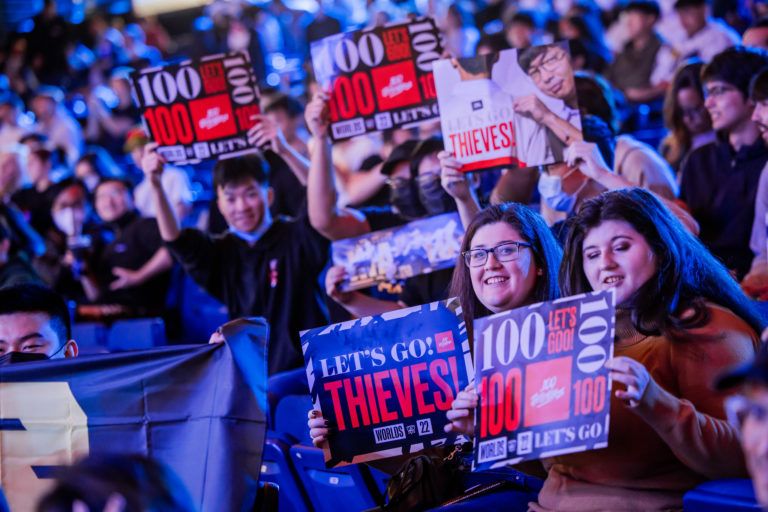 100 Thieves has found its replacement for former League of Legends general manager Chris “PapaSmithy” Smith. The organization promoted its head of strategy of analytics Joseph “JungleJuice” Jang to the GM role today for the 2023 League of Legends season.

JungleJuice has been with the 100 Thieves organization since 2017, filling a variety of roles for the League team, including coach and analyst.

This offseason, 100 Thieves is beginning to move in a different direction after parting ways with PapaSmithy after three seasons. The decision to move on was communicated to him prior to the League World Championship. The team failed to make it past the group stage at Worlds for the second consecutive year after finishing with a record of 1-5 at the tournament.

“Building a superteam of veterans is one extreme, building a team of all rookies is another extreme,” 100 Thieves president John Robinson said in a video posted to social media. “For 100 Thieves, we’re always weighing everyone but usually end up somewhere in the middle.”

The team’s roster is still up in the air, as no player personnel has been officially announced at this time. However, reports have circulated around 100 Thieves that the team intends to promote its top prospect, support player Busio, to a starting role ahead of next year. Additional reports have pointed towards the idea of former LCS MVP Doublelift potentially joining 100 Thieves if he pursues a comeback.

Related: 100 Thieves reportedly allows 2 star players to explore their options ahead of next LCS season

“We’re going to go into this next era with a very balanced view,” Robinson said off 100 Thieves’ future roster. “We absolutely want to put the best team on stage that we can, but we are thinking about spring with an eye on summer, and the future as well.”

Four of 100 Thieves’ starting players have contracts with the team that last through the end of the 2023 season, according to the League global contract database. The only player who is set to be an unrestricted free agent when free agency begins later this month is top laner Ssumday.